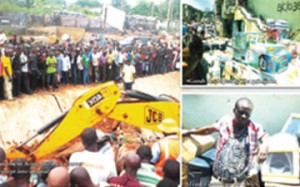 Seven persons were feared dead and goods worth millions of naira destroyed in the commercial city of Onitsha during a down pour.

Those who died included two men said to be driving in a Toyota Camry car towards Asaba in Delta State, as well as a Keke NAPEP operator and his passengers. A crane was used to recover the Toyota car and the two occupants.

The identities of the victims have not been established, but they were said to be carried by the ravaging flood at the slum area of Okpoko junction, near the Upper Iweka road in Onitsha. Two other corpses were also seen at a spot near the Kate bus stop in the area.

It was gathered that corpses of the occupants of the Camry car were recovered yesterday, but the Keke NAPEP operator and his passengers were yet to be found, though the tricycle had been recovered.

Mostly affected were the Onitsha Electronics International Market and Enamelware Market which are adjacent the Head Bridge-Upper Iweka expressway on the Okpoko end of the road where many warehouses were submerged.

Traders at the market were seen salvaging their goods washed away by the flood yesterday with some of them claiming that everything they had in their shops went with the flood.

The Public Relations Officer of the traders’ association, Mr. Innocent Ezemenari, said it was difficult to quantify the loss immediately, even as he said that it ran into millions of Naira.

According to him, most of the people affected were young traders who had just been settled by their masters, while others were those who got their goods on credit.

While calling on President Goodluck Jonathan, Governor Peter Obi and people of goodwill to come to their aid Ezemenari urged the Federal Ministry of Works to extend the drainage system along the Upper Iweka-Head Bridge axis to the River Niger to allow free flow of water during the rain.

The traders’ spokesman observed that if urgent measures were not taken, the entire market would be sacked when the rains become heavy.

He appealed to Anambra State government to speed up work on the on-going Sakamori drainage project which is costing the state and federal governments about N2 billion. [Vanguard]