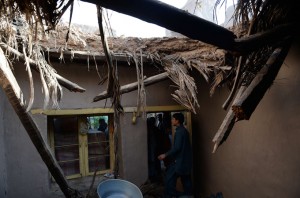 No fewer than seven people have been killed, and dozens injured while many homes were destroyed when a powerful earthquake hit eastern Afghanistan, according to officials.

Wednesday’s quake, measured at a magnitude of 5.6 by the US Geological Survey, sent people rushing from their homes in worst-hit areas and was felt in the Afghan capital Kabul and in Islamabad in neighbouring Pakistan.

The quake struck at 09:25 GMT at a depth of 62km, with its epicentre 24km northwest of the eastern Afghan city of Jalalabad near the Pakistani border, the USGS said in a revised update.

Six people died in Nangarhar province of which Jalalabad is the capital, said provincial spokesman Ahmad Zia Abdulzai, and 75 people were injured. Forty of them were given first aid and the rest admitted to hospital for further treatment.

“We are still in the process of getting information from the affected areas. Among the dead are some children,” Abdulzai told AFP news agency.

One person was killed and one injured in neighbouring Kunar province and many homes were destroyed, said provincial spokesman Wasefullah Wasef.

In Kama district outside Jalalabad, people ran from their mudbrick homes in panic when the tremor was felt, a witness said, describing it as “very powerful”. Two walls in one village collapsed, he said.

Afghanistan is frequently hit by earthquakes, especially in the Hindu Kush mountain range which lies near the juncture of the Eurasian and Indian tectonic plates.

In June 2012, two quakes in the area triggered landslides that killed at least 75 villagers.

Wednesday’s tremors came a week after a 7.8-magnitude earthquake centred in Iran affected thousands of people in remote southeastern Pakistan and killed 41 people.

Pakistani victims have staged angry protests, accusing the government of failing to provide adequate relief after hundreds of homes were destroyed or damaged.

On October 8, 2005 a 7.6-magnitude earthquake killed more than 73,000 people and left about 3.5 million homeless, mainly in Pakistan-controlled Kashmir and parts of northwestern province Khyber Pakhtunkhwa.

Afghanistan, is in a geologically active area where earthquakes may occur almost every year.