Actor Emeka Ike seems to have put behind him the pain of the recent loss of the Actors’ Guild of
Nigeria (AGN) leadership to Ibinabo Fiberesima. 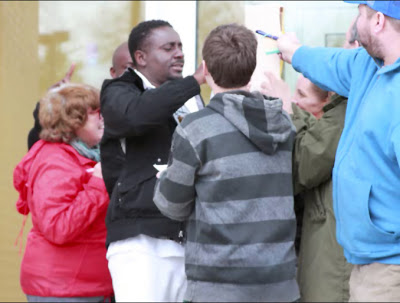 Splendor magazine exclusively gathered that Emeka Ike was in the U.S sometimes back where he took the opportunity to complete his role in a Hollywood movie which he has been working on for a while now.

Just as the saying goes, “a prophet has no honour in his town”, the climax of it all was that some white Americans who saw how well the Nollywood star acted during the shoot, began to rush him, jostling for his autographs.

According to our source who trailed the actor all the way in America, “the fans bombarded Emeka to the extent that even me, I began to wonder, shey nor bi the same Emeka Ike wey dey act for Nollywood for Naija bi dis?”

Nollywood actress Eve Esin is finally off the market. The beautiful actress just took to social media to announce her engagement by sharing a photo...
Read more

Popular singer, Adekunle Kosoko simply known as Adekunle Gold has shared a new video on his Instagram page on the occasion of his 33rd...
Read more
- Advertisement -