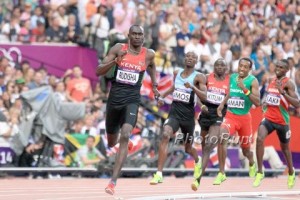 David Rudisha, the World Record holder will be leading a world-class 800 meter field at the Prefontaine Classics.
Rudisha who shattered the 1.41 barrier in London is no stranger when it comes to racing the best in the world. The 39th edition of the Prefontaine Classic on June 1 2013 will be his first opportunity to display his incredible talent at historic Hayward Field.
Meanwhile the Kenyan superstar recognizes the significance of the event.
“I’ve heard about the great crowd at Eugene. Bernard Lagat tells me it’s where they have a special interest in middle distances,” says the 24- year- old Rudisha. “So I’m so excited to go and run there for the first time. I hope to run well and give the crowd something to enjoy.”
Rudisha is an amazing talent when it comes to the 800 meters. He now owns 6 of the 8 fastest times in history, including his world record of 1:40.91 set on his way to winning an Olympic Gold in London 2012. He was named men’s Athlete of the Year by Track & Field News magazine for his stellar 2012 season.
Every 2012 Olympic finalist are all in the race, however, Rudisha’s confirmation makes for a phenomenal Pre Classic field. It also makes the men 800m the 5th of 5 events announced by the Prefontaine Classic that will include every medalist from the London Olympics.
The silver and bronze medalist from London may not only be teenagers but record setters in their own right. Nigel Amos of Botswana who won silver in London is one of the only 5 men to have completed the race under 1:42, and the World Junior champion and record holder (1:41.73) is the fastest of any 18- year- old ever. His personal record equals that of legendary Sebastian Coe, whose 1981 world record was set more than a decade before Amos was born. Timothy Kitum of Kenya who won bronze in London extends the youth movement, as his PB of 1:42.53 is the fastest ever by a 17- year- old. Amos and Kitum were ranked No. 3 and 5 in the world last year by Track and Field News (T&FN.)
Mohammed Aman of Ethiopia, the only man to have defeated Rudisha, not once but twice in the last 3 years will also be in contention. Aman, the 2012 World Indoor champion defeated Rudisha in 2011 and 2012 and also a finalist in both the 2011 World Championship and 2012 Olympics. Aman’s aim is set on this summer’s World Championships in Moscow. Aman was ranked No.2 in the world last year by T&FN.
Two more world- class teenagers grace the Pre Classic field, Leonard Kosencha and Abraham Rotich, both from Kenya, ranked Nos. 4 and 6 in the world last year by T&FN. Kosencha won the 2011 World Youth Championship over Aman, Kitum and Amos. Rotich, 19, is the only teenager in the field not eligible for junior records this year, as he turn 20 before the end of the year.
The Prefontaine Classics will include the duo of Duane Solomon and Nick Symmonds both from America, Abubakar Kaki of Sudan, Andrew Osagie of Team GB, Adam Kszczcot of Poland and Job Kinyor of Kenya.
The Prefontaine Classic is the longest- running outdoor invitational track and field meet in America and is part of the IAAF Diamond League of meets held worldwide annually. Last year edition, presented the most 2012 Olympic gold medalists (20) of any invitational meet in the world.