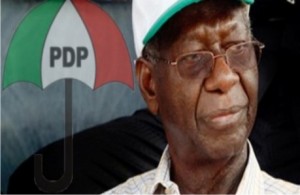 The current efforts of the Peoples Democratic Party, PDP, Board of Trustees, BoT, Chairman, Chief Tony Anenih, aimed at reconciling aggrieved factions within the party, is not in any way conflicting with the functions of the National Working Committee, NWC.

This was made known by the National Chairman of the PDP, Alhaji Bamanga Tukur.

In a statement signed by PDP National Publicity Secretary, Chief Olisa Metuh, the party denied claims by what it described as a faceless association, “Forum for Equity and Justice,” that there was a rift between Tukur-led NWC and Chief Tony Anenih.

Metuh said:   “We are aware that this group of meddlesome interlopers and political jobbers with no fixed address has been commissioned to stir up controversies and portray the BoT as working at cross purposes with the NWC.

“For the avoidance of doubt, the NWC and the BoT are united and committed to providing the necessary political direction for the party.

“The NWC is solidly behind the activities of the BoT in further uniting the party, which is central and cardinal for the party ahead of 2015.

“Anenih, as one of the founding fathers of our great party, has always been in the political mainstream and commands the respect of all PDP leaders and elders.

“He has proven to be highly effective in handling party issues and has been acclaimed as one of the greatest political minds the nation has ever produced.

“In fact, nothing has been more beneficial to the PDP than the election of Anenih as the BoT chairman and the NWC is committed to giving him all the support he needs to achieve his mandate. The Board of Trustees is made up of men and women of high integrity who are the conscience of the party.

“Most of them are experienced statesmen and women who played key roles in the formation of the party. The party, therefore, stands to benefit a great deal from their wise counsel at this critical moment.

“We urge our members to completely disregard these amorphous groups and continue to work together as a family, in line with the visions of the founding fathers of our great party.”