The Anti-Corruption Network has reminded President Goodluck Jonathan of its petition one week ago in which it chronicled cases of flagrant abuse of office and incompetence against the Attorney-General and Minister of Justice, Mohammed Adoke. 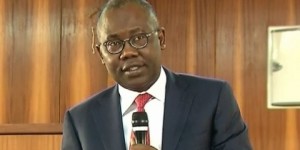 In that petition, the group urged Mr. Jonathan, if his anti-corruption claims are genuine, to fire the Minister.

“We are also aware that for you to make good success of your efforts, you need a team of people whose integrity, commitment, proficiency and character as well as their body language must be visibly above board,,” the Anti-Corruption Network said in its reminder today.

“We are equally conscious that all hands must be on deck to help realize the purpose of Government, secure democracy and enhance good Governance. It is in the light of these that we will continue to work in partnership with your Excellency to ensure a better Nigeria and desirable qualitative life for our people by exposing every inappropriate acts, behaviors and corrupt practices by those entrusted with leadership position in public offices.”

Accusing the government’s number one lawyer of massive corruption, abuse of office and gross incompetence, the group provided a long litany of cases and issues to back up its argument for Mr. Adoke to be relieved of his appointment.

Previously, on February 17, 2013, a separate batch of anti-corruption campaigners, the Anti-Corruption Coalition, called on Mr. Adoke to resign his office, or be prosecuted for “aiding and abetting” corruption in Nigeria.

President Jonathan, who does not normally take any action concerning corruption allegations among members of his cabinet, ignored all of those allegations.

Below is the full text of the petition sent to him about Mr. Adoke one week ago by the Anti-Corruption Network:

FLAGRANT ABUSE OF POWER VESTED IN THE OFFICE OF THE ATTORNEY GENERAL BY MR MOHAMMED ADOKE.

We in the Anti-corruption Network will continue to speak for millions of Nigeria who cannot speak for themselves. The country is facing perilous times due to massive Corruption abuse of office and gross incompetence of the Minister of Justice and Attorney General of the Federation. We are in times ofvicissitude and versiliation in Nigeria because of the illegal and corrupt practices of Mr MohammedAdoke due to conflict of interest and outrageous use of powers against public interest.

On 10th December, 2012, during the celebration of international day of Human Right, Mr. Mohammed Adoke delivered a speech to commemorate the day and said that the Nigerian Police had killed seven thousand, one hundred and six people in four yearsextra judicially , out of which 2000 (two thousand) are detainees and suspects. The question now is, as Attorney General of the Federation, what steps has Mr. Mohammed Adoke taken to bring the policemen who committed these extra-judicial killings to book in his efforts at stopping judicial killings in Nigeria?

It is also known to Mr. Adoke that about 197 people (drug convicts) jailed in the Lagos area did not get to prison, they did not serve their Sentences at all. What has Mr. Adoke as Attorney General of Federation done to get those people declared wanted and taken to prison to serve their jail term? Since the NDLEA (National Drug Law Enforcement Agency) is under his Ministerial control.

Mr. Adoke in his capacity as Attorney General headed the prerogative of mercy Committee that recommended the recent National pardon list of Mr. President. How can Mr. Adoke recommend National pardon for a man that has international warrant on him, a man who admitted been guilty to a six count charges, He recommended pardon for a man who caused pains, ache and deaths to many family by liquidating the Bank of the North, more disgusting is the granting of pardon to major Magaji, a man who committed Sodomy, a man who slept with four men, a man who lost his case both at the Court of Appeal and Supreme Court. In fact the Supreme Court in her judgement described the satanic Act by major Magajias brazen bizarre and barbaric, yet Mr. Adoke recommended these people for pardon against public interest.

We will state instances of flagrant abuse of powers vested in the office of the Attorney General by Mr. Adoke.

Cecilia Ibru, former Oceanic Bank Boss convicted of Bank and Securities fraud by a Federal High Court in Lagos and Sentenced to 6 months in jail and was to forfeit over #150 billion in cash and assets. However she entered into the plea bargain with the AGF (Adoke) on the 15th September 2010, a process that has no thanks to Adoke developed a “K” leg. The meeting for plea bargain for Cecilia Ibru took place in the office of the Attorney General and as we speak, Cecilia Ibru is still in custody of all those supposedly seized assets. So also did the Mr. Adoke supervise the plea bargain in his office of Julius Berger, and Chief Lucky Igbinedion.

-Senator Teslim Folarin and 3 other person charged with conspiracy and murder of one Mr. Lateef Salako on 30th December, 2010 during the local Government Congress in Ibadan, Oyo State, despite what many Lawyers saw as clasping evidence, Adoke withdrew the case. This we juxtapose with the recent case of Oyerinde, where Mr. Adoke said, his office does not interfere with state matters. In Oyerindes case the President of the Federal Republic of Nigeria ordered the Inspector General of Police to investigate the matter, yet it is called a State matters, but Mr. Adoke’s intervention in Senator Folarin matter is not Federal presence, laughable!!! The police and SSS have conflicting reports; the office of the Attorney General of the Federation demonstrated incompetence because that office ought to have reconciled the two conflicting reports that have exposed the entire country to ridicule.

-The AGF (Adoke) withdrew the prosecution of Suleiman Bello, Minister of State for health, for allegedly soliciting and receiving #11.2M from Governor of Adamawa State while serving in Adamawa State as Electoral Commissioner.

-The AGF (Adoke) raised a memo on the case of the Vaswani Brothers (Sunil, Heresh andMaresh) who were deported for a second time in April 2009 for an alleged #2.5BN Tax evasion that they should be allowed to return to Nigeria to do business.

-The AGF (Adoke) refused to produce 14 witnesses that were to testify in the $180M Haliburton bribery scandal which led to the striking out of the suit by Justice Abubarkar Umar of an Abuja High Court.

-In November, 2010, the AGF ordered EFCC to terminate the criminal case filed against the former Director of Power Holding Company of Nigeria, (PHCN), Maigada Shuiabu, one time Chief Executive Officer of Mtel. Edwin Moore Monife, Ex General , Manager of Finance in NITEL, Emmanuel Chukwuemeka Ossai and a former permanent Secretary in the Federal Ministry of Power and Steel, Mahmood Sadiq, Mohammed after EFCC had docked them thereby putting an end to the Siemens scam.

-The AGF (Adoke) also stalled the #6 billion frauds in the National Judicial Institute NJI. Where an experte order was granted by Justice Kafarati of which the AG (Adoke) refused to refile the case.

-Today the Malabu oil deal is dead and buried because the AG has refused to push the case and is in fact frustrating the prosecution.

-The prosecution of the officials of the Nigerian Electricity Regulatory Commission (NERC) was also withdrawn against public interest.

-Despite stating in his legal advice on the complaint to President Jonathan on chief Micheal Emerahs complaint against international Bank(Citibank) for fraud that after a careful study of this case file sent to his office by the inspector General of Police, “these was enough evidence of which the accused were charge” he still withdrew the case from Court.

-The attempt by Adoke to withdraw the case of Fedilis Anosike, the man who bought Daily Times failed as Justice Pat Ajoku of the Federal High Court, Lagos insisted that the AG’S power to withdraw a criminal Charge against any person under section 174 (1) & (2) of the 1999constitution, that power under sub – section 3 must be exercised in the public interest and to prevent abuse of legal conspiracy and stealing of over #3BN worth of properties belonging to the media house.

-In the case of Erastus Akingbola at the Federal High Court, a case of #10 billion money laundry, the case struck out by Justice Achibong on grounds that the prosecution was shoddy, yet the case is yet to be refile by the AGF.

-It is also laughable that the Government of a country declared mania of the pension scam WANTED yet the AG does not file any charge against him.

-The AG has also shown gross disregard for Court orders and Judgements. The most recent was the case filed in a Lagos Federal High Court, case suit FHC/L/CS/514/12 between Mr. Boniface Okezie and the Attorney General of the Federation and 1 other. Where the Court ordered that the Attorney General of the Federation disclose to the plaintiff the following information. This information the Court ordered must be carried out by the AG within 72 hours after the Judgement delivered on the 22nd day of February, 2013.

Unfortunately over one month after the AG is yet to comply with the Court order. If the AG will not obey Court orders, then who will in Nigeria. The information includes:

1. The list of criminal prosecutions being carried out by the Ministry of Justice through private Lawyers.

2. The total amount spent by the Ministry of Justice in the course of the said prosecutions and what is in the source of funding for such.

3. How many private lawyers are currently being retained by the Ministry of Justice for the prosecution of crimes and what are the details of the fees to be paid and that I have actually been paid to those lawyers on case by case basis.

5. The reason for abandoning the legal officers in the Ministry of Justice in favour of private lawyers to prosecute offenders.

The AG is yet to obey this Court order. With all the above stated abuse of office, corrupt practices, incompetence and conflict of interest, we call on the President of the Federal Republic of Nigeria to immediately sack Mr. Adoke Mohammed as the Minister of Justice and Attorney General of the Federation if his fight against corruption is genuine.

We also call on the Nigerian Bar Association to put their engine in motion for disciplining Adoke for gross professional mis-conduct. The former Minister of Justice, Aoudoakaa was stripped of his SAN position for lesser offenses. So we implore the NBA to investigate and punish Adoke accordingly in the interest of the BAR.

May we never see that day, that legal profession tenants, conventions and practice direction is taken away.