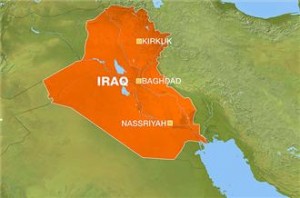 Sectarian tensions have escalated in Iraq, where the death toll from a four-day wave of violence has passed 190, officials have said.

Thousands of protesters this week to voice their anger at the government of Nouri al-Maliki, as they gathered in cities across the country, calling on the prime minister to step down and put an end to the discrimination against Sunni Muslims.

Martin Kobler, a UN envoy, warned on Friday that Iraq was at “crossroads” and called for restraint as violence continues.

The comments came as bombings at four Sunni mosques in and around Baghdad killed four people and wounded 50 on Friday, according to an interior ministry official and medics.

The violence was the latest in a wave of violence that erupted on Tuesday when security forces moved in against anti-government protesters near the Sunni northern town of Hawijah. The ensuing clashes left 53 people dead.

Sunni gunmen were also battling government forces on Friday after they took over Suleiman Beg, a town in Salahuddin province north of Baghdad, in response to a deadly raid in the town of Hawija on Wednesday.

The gunmen’s capture of the town came amid a surge of violence which began on Tuesday when security forces moved in against anti-government protesters near Hawijah.

The protest-related violence is the deadliest so far linked to demonstrations that broke out in Sunni areas of the Shia-majority country more than four months ago.

Thousands of protesters have called for the resignation of Maliki, a Shia, and railed against authorities for allegedly targeting their community.

Abdulghafur al-Samarraie and Saleh al-Haidari, leading clerics who respectively head the Sunni and Shia religious endowments, held a joint news conference on Wednesday in which they warned against sectarian strife and called for top politicians to meet at a Baghdad mosque on Friday.