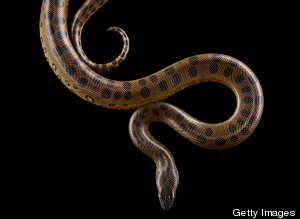 A fire has completely destroyed a home in Brighton, Colorado Thursday morning and has displaced two adults, five children and as many as 8,000 snakes and reptiles.

The owners of the home are reportedly breeders of rare snakes, Fox31 reports, and also own a pet store in Thornton. Incredibly the majority of the snakes, which were in crates in the basement, appear to be in good condition.

Firefighters are now working with the homeowners in an effort to get the snakes out of the basement and into a new home.

Thankfully no humans were injured, but tragically five dogs died in the fire, according to CBS4.

The Denver Post reported that the fire broke out around 4:30 a.m. in the 14600 block of Umpire Street in Brighton and it took around 40 firefighters to extinguish the blaze.

Because the home was in a rural area, firefighters had to bring water to the home in pumper trucks, according to 9News.

The cause of the fire has yet to be determined.