A former Minister of the Federal Capital Territory under the Olusegun Obasanjo administration, Mallam Nasir el-Rufai, has said that a former Vice-President, Abubakar Atiku, lied when he accused him of imposing the Pentascope management contract on the defunct Nigeria Telecommunitions Limited. 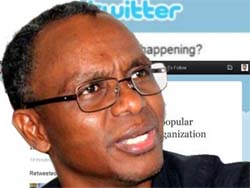 El-Rufai said that Atiku, who was Chairman of the National Council for Privatisation, gave a written approval to enter into a contractual agreement with Pentascope to manage NITEL on February 21, 2003.El-Rufai was the Director-General of the Bureau for Public Enterprise when the Federal Government entered into a contractual agreement with a Dutch firm, Pentascope, to manage the nation’s telecommunications firm, NITEL, on the eve of the privatisation carried out by the Obasanjo administration.

El Rufai whose allegations were contained in an electronic mail on Monday, signed by his Media Advisor, Mr. Muyiwa Adekeye, said that Atiku’s memo on the Pentascope’s management contract with NITEL dated February 20, 2003 was raised by a director of the BPE in charge of the duties of the Director-General at the time.

The former minister explained further that the Pentascope deal was made following what he described as a competitive selective process following an earlier decision that a management firm be engaged to prepare NITEL to operate like a private firm in addition to preserving its assets.

He added that the terms of the contract with Pentascope made it a duty for the BPE to set up an executive committee to monitor the operations of the company on a daily basis.

According to him, the management contract was terminated in 2005 because it was frustrated due to lack of effective supervision by the BPE and other key players in the Ministry of Communications and the NCP under Atiku’s leadership.

He said, “On Pentascope, we see the same pattern of muddying the waters with falsehood. As chairman of the National Council on Privatisation, Atiku gave his approval in writing on 21 February 2003 for the management contract with Pentascope to be signed.

“The memo on which Atiku minuted his approval, BPE/I&N/NT/MC/DG/280, is dated 20th February 2003, and was initiated by the director of BPE that was covering the DG’s duties at the time. By the virtue of the high office he then held, Atiku knows that Pentascope was not foisted on NITEL but emerged from a properly advertised and competitive selection process.

“After the failure of the first attempt to sell NITEL, it had been decided that there was the need for a management contractor to keep the momentum of preparing the company to operate like a private entity and to preserve its assets. Pentascope resumed in NITEL on 28 April 2003, shortly before el-Rufai left the BPE to become a minister.

“The Pentascope contract terms included obligations by the BPE to monitor the contract, and for the NITEL Board to set up an Executive Committee to supervise day-to-day operations in NITEL. Between the new BPE leadership that neglected its responsibilities, the NCP which Atiku chaired and which failed to supervise the BPE and the bureaucrats and politicians around the Ministry of Communications, the management contract was frustrated and terminated in 2005.”

El Rufai’s reaction followed an allegation by Atiku in an interview with Sunday PUNCH, that el-Rufai, as the DG of the BPE defied wise counsel to foist the Pentascope management contract on NITEL.

Atiku had alleged that el-Rufai ignored public outcry against his choice of Pentascope to manage NITEL even when it was proved that the foreign firm was financially incapable and lacked the competence to manage the telecommunications firm.

The former VP had said, “On Pentascope, one would have expected your paper to direct the questions to el-Rufai himself. The Pentascope scandal was one of the issues investigated by the National Assembly and it accused el-Rufai of ignoring wise counsel by imposing the company on NITEL.

“Despite proven allegations that Pentascope was not financially capable and technically competent to handle NITEL management contract, the former Bureau of Public Enterprise Director-General ignored public outcry and forced the Dutch company on NITEL.

“Before the coming of Pentascope, NITEL was making an estimated N100bn profit annually. However, as soon as Pentascope took over, NITEL’s profits were nose-diving incredibly.

“With telecoms stakeholders, the National Assembly and the Nigerian public insisting that the imposition of Pentascope on NITEL was ruinous to national interest, the Federal Government eventually cancelled the management contract against el-Rufai’s desire.”

El-Rufai, who also commented on the NITEL GSM contract involving Ericsson and Motorola, denied Atiku’s claim that his brother was on the board of Motorola.

He also debunked the claim that the contract was split, adding that it was awarded to Ericsson, “but at the lower price submitted by Motorola, because of Atiku’s intense lobby and smears deployed to advance Ericsson’s bid.”

He alleged that Atiku and his then ADC, Abdullahi Yari, spoke on several occasions to him to favour Ericsson in the bid.

He said that Atiku had a responsibility to explain to Nigerians why he was pushing for Ericcson to get the offer.