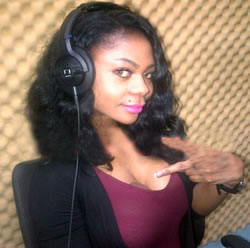 Big Brother Africa Winner and Naija Info OAP, Karen Igho has joined the cast of the award winning  Soap Opera Tinsel. The show which boasts a huge fan-base in Nigeria and beyond airs on DSTV. 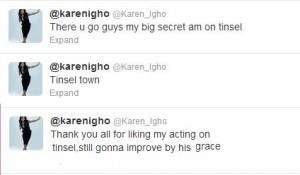 Tinsel is one of the most watched Soap Operas on African television and  Karen Igho starred on the hit TV show last night, April 4 2013. Karen took to Twitter yesterday to share her big news which caused a storm of delight. After the show, the praises kept pouring in from fans and critics alike. And the star? She lapped it all up, with grace and thanksgiving: