Monguno Local Government Area of Borno State is about putting behind it the recent killing of six secondary school teachers, including a principal, the local government was again plunged into mourning as many students were, on Saturday, murdered in cold blood by some gunmen suspected to be members of the Jama’atul Ahlis Sunnah Lid’ Awati, also known as Boko Haram. 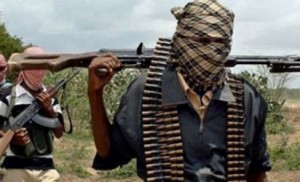 Sunday Tribune learnt that the gunmen killed many students of Monguno Secondary School by slitting their throats, after laying an ambush for them as they returned home from centres where they wrote the West African Examination Council (WAEC) Senior Secondary Certificate Examination (SSCE).

Monguno is 135 kilometres North of Maiduguri, the state capital; and it is considered to be an epicentre of activities of the Islamist sect.

The gunmen, according to a villager, Mallam Aisami, ambushed the candidates on their way home on foot and bicycles. He added that the assailants tied the students’ hands together at their backs and slit their throats on the foot paths leading to the school premises in the afternoon.

He said when the dastardly deed had been done, the gunmen fled on three motorcycles towards Marte Local Government Area of Northern Borno before men of the Joint Task Force (JTF) rushed to the scene three hours after the students were already slewn.

They stated that it was a very “unfortunate and frightening incident,” decrying all that had been happening in the state.

Sagir and Kubo could, however, not ascertain the exact number of students allegedly killed by the suspects at Monguno.

Kubo, in a telephone interview, told journalists that; “I am calling on the people of Borno State to continue to pray and fast so that the incessant attacks and killings in the state cease peace and unity are restored.