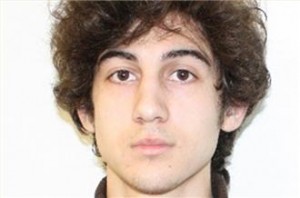 Boston bombing suspect Dzhokhar Tsarnaev who is receiving treatment for injuries sustained leading to his capture has been moved from a hospital to a prison medical centre in Massachusetts, a US marshal’s spokesman told CNN on Friday.

Tsarnaev was sent to the Federal Medical Centre Devens, spokesman Drew Wade said. The facility is about 40 miles (65 kilometres) north-west of the Boston-area hospital where Tsarnaev has been convalescing since he was found critically wounded in a boat in a massive police manhunt, days after the bombing which killed three and wounded 264.

The 19-year-old has been charged with using a weapon of mass destruction and could face the death penalty if convicted in US federal court.

His older brother, Tamarlan Tsarnaev 26, also accused of participating in the twin bombing, was killed in an explosive shootout as the two tried to evade police in a stolen car.

The suspects planned to drive to New York with their remaining arsenal of explosives and launch an attack on Times Square, the city’s mayor Michael Bloomberg said on Thursday.

Dzhokhar Tsarnaev is said to have told investigators about his plan during interrogations earlier this week in the Boston hospital where he is being treated for gunshot wounds to the neck, hands and legs.

The revelation came as pressure increased on US authorities over their handling of the case. Senators emerged from new briefings by the FBI on Capitol Hill with concerns over how a number of US agencies handled warnings from Russia about Tamerlan Tsarnaev, 26, who died after a botched escape attempt last Thursday.

Police in Boston were also facing questions over how they handled the manhunt for the brothers as new details emerged that contradicted earlier accounts given by senior officers.

Photo and video footage showed bullet holes in the boat, and the boat’s owner described it as looking “like Swiss cheese”. After Tsarnaev was detained, Boston police commissioner Ed Davis claimed police had “exchanged gunfire with the suspect who was inside the boat”. But it has now emerged that no weapon was recovered from the boat and Tsarnaev was unarmed.

In fact, only one gun connected to the Tsarnaevs has been recovered, from the scene of the shootout where Tamerlan died on Thursday night. Multiple reports said the serial number had been removed.

Speaking after the capture of Dzhokhar Tsarnaev, Davis said that the boat where the suspect had been hiding was “outside of the perimeter” established by officers. But Davis now says the boat was inside the perimeter. “It was an area that should have been checked,” he said. “We are not sure how long he was in the boat. There was a pool of blood near where the car was dumped about four or five blocks away from the boat.”

Davis said the circumstances of the capture of Tsarnaev would be reviewed. “We will have to see what prompted the volley of shots before the ceasefire was ordered by a superintendent of the Boston police,” he said.

In Russia, the Tsarnaevs’ mother, Zubeidat Tsarnaeva, said she regretted emigrating to the United States, while continuing to insist that her sons are innocent. “You know, my kids would be with us, and we would be fine [if we hadn’t moved],” she told the Associated Press. “So, yes, I would prefer not to live in America now. Why did I even go there? Why? I thought America is going to protect us, our kids, it’s going to be safe.”