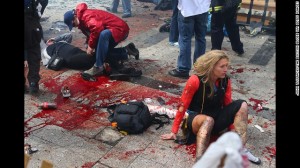 A suspect has reportedly been identified in the Boston Marathon bombings, according to investigation sources.

Federal officials have however denied the report. FBI and the U.S. attorney’s office in Boston said no arrests had been made.

“Contrary to widespread reporting, there have been no arrests made in connection with the Boston Marathon attack,” the FBI said in a statement. “Over the past day and a half, there have been a number of press reports based on information from unofficial sources that has been inaccurate. Since these stories often have unintended consequences, we ask the media, particularly at this early stage of the investigation, to exercise caution and attempt to verify information through appropriate official channels before reporting.”

A law enforcement official briefed on the investigation had told The Associated Press that a suspect was in custody. The official, who was not authorized to divulge details of the investigation, said the suspect was expected in federal court. He even stood by the information even after it was disputed, although he spoke to AP on the condition of anonymity.

An official announcement on the issue is expected at 5pm (2100 GMT) on Wednesday.

The blasts at the finish line of Monday’s race injured 176 people and killed three: an 8-year old boy, Martin Richard, a 29-year-old woman, Krystle Campbell and a Boston University graduate student who was a Chinese citizen identified by the school as Lu Lingzi.

No one has claimed responsibility for the attack.