The perpetrators of the Boston Marathon bombings that led to the death of 3 persons and injured scores other have been identified as Chechen brothers by the New York Times, which cited a source in law enforcement.

Dzhokhar A. Tsarnaev, 19, wearing a white cap in the picture above, is currently being hunted by police in Boston.

His brother Tamerlan Tsarnaev, 26, was killed in a shootout by police on Friday morning after leading the police on a wild chase after the fatal shooting of a campus police officer, while the other was sought in an immense manhunt that shut down large parts of the area. Gov. Deval Patrick of Massachusetts said residents of Boston and its neighboring communities should “stay indoors, with their doors locked.”

The suspects are from a region of Russia near Chechnya, and have lived in the US for at least one year, AP sources say

The manhunt sent the Boston region into the grip of a security emergency, as hundreds of police officers conducted a wide search and all public transit services were suspended.

One law enforcement official said Dzhokhar Tsarnaev was wounded, and two other officials said the authorities had tracked him at some point during the manhunt by his blood trail.

The uncle of the men, Ruslan Tsarni, who lives in Montgomery Village, Md., told reporters that he was ashamed of their actions, bitterly calling them “losers” and sternly denouncing the bombings. And he urged the surviving brother to turn himself into the authorities.

“I say Dzhokhar, if you’re alive, turn yourself in and ask for forgiveness,” said Mr. Tsarni, who said that his family had been estranged from theirs, and that their father, who recently moved back to Russia, and had worked “fixing cars” in America.

The brothers were said to have substantial presences on social media. On Vkontakte, Russia’s most popular social media platform, the younger brother, Dzhokhar, describes his worldview as “Islam” and, asked to identify “the main thing in life,” answers “career and money.” He lists a series of affinity groups relating to Chechnya, and lists a verse from the Koran, “Do good, because Allah loves those who do good.”

Early Friday, a virtual army of heavily armed law enforcement officers was going through houses in Watertown, outside of Boston, one by one in a search for the second suspect. The police had blocked off a 20-block residential area and urged residents emphatically to stay inside their homes and not answer their doors.

The Boston police commissioner, Edward Davis, said, “We believe this to be a man who’s come here to kill people, and we need to get him in custody.”

In Washington, as well as in the Boston area, law enforcement and counterterrorism officials were scrambling to determine whether the two brothers had any accomplices still at large and whether they had any connections to foreign or domestic terrorist organizations.

Intelligence analysts were poring over the brothers’ e-mails, cellphone records and postings on Facebook and other social media for clues. Authorities have also started interviewing family members, friends and other associates for information about the men, and any possible ties to extremist groups or causes, officials said.

Federal officials are also investigating any travel by the brothers outside the United States, perhaps to receive training. “They will take these guys’ lives apart,” said one senior retired law enforcement official.

The older brother apparently traveled to Turkey in 2003. The Turkish interior minister, Muammer Guler, confirmed reports that he had arrived there on July 9, 2003, with three others carrying the same surname, and left the country 10 days later from Ankara, the capital, the semiofficial Anatolian News Agency reported.

“It is estimated that they were a family,” Mr. Guler said. “We established that they had no connection with Turkey.”

There was no information on Tsarnaevs’ next destination after Ankara.

As the manhunt grew in intensity, law enforcement officials throughout New England tried to chase down leads.

About 10:30 p.m., the police received reports that Sean Collier, a campus security officer at M.I.T., had been shot while he sat in his police cruiser. He was found with multiple gunshot wounds, according to a statement issued by the acting Middlesex district attorney, Michael Pelgro, Cambridge Police Commissioner Robert C. Haas and the M.I.T. police chief, John DiFava. The officer was taken to Massachusetts General Hospital, where he was pronounced dead. 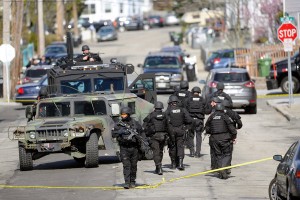 A short time later, the police received reports of an armed carjacking of a Mercedes sport-utility vehicle by two males in the area of Third Street in Cambridge, the statement said. “The victim was carjacked at gunpoint by two males and was kept in the car with the suspects for approximately a half-hour,” the statement said. He was later released, uninjured, at a gas station on Memorial Drive in Cambridge.

The carjacking victim said the brothers told him they were responsible for the bombing of the Boston Marathon, a law enforcement official said.

The police immediately began to search for the vehicle and pursued it into Watertown. During the chase, “explosive devices were reportedly thrown from car by the suspects,” the statement said, and the suspects and police exchanged gunfire in the area of Dexter Avenue and Laurel Street.

A Watertown resident, Andrew Kitzenberg, 29, said he looked out his third-floor window to see two young men of slight build in jackets engaged in “constant gunfire” with police officers. A police S.U.V. “drove towards the shooters,” he said, and was shot at until it was severely damaged. It rolled out of control, Mr. Kitzenberg said, and crashed into two cars in his driveway.

The two shooters, he said, had a large, unwieldy bomb that he said looked “like a pressure cooker.”

“They lit it, still in the middle of the gunfire, and threw it,” he said. “But it went 20 yards at most.” It exploded, he said, and one man ran toward the gathered police officers. He was tackled, but it was not clear if he was shot, Mr. Kitzenberg said.

The explosions, said another resident, Loretta Kehayias, 65, “lit up the whole house.” She said, “I screamed. I’ve never seen anything like this, never, never, never.”

Meanwhile, Mr. Kitzenberg said the other man got back into the S.U.V., turned it toward officers and “put the pedal to the metal.” The car “went right through the cops, broke right through and continued west.”

The two men left “a few backpacks right by the car, and there is a bomb robot out there now,” he said.

During this exchange, an MBTA police officer was seriously wounded and taken to the hospital.

At the same time, Tamerlan Tsarnaev was critically injured with multiple gunshot wounds and taken to Beth Israel Deaconess Hospital in Boston, where he was pronounced dead at 1:35 a.m., officials said.