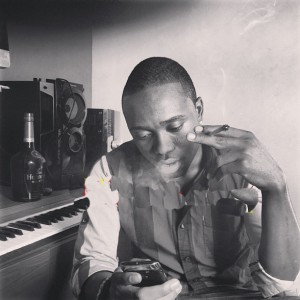 This photo of Brymo smoking cannabis in one hand and typing on his blackberry with the other hit the net a couple of days ago. However, it isn’t a big scandal because it was the “Ara” singer who released the photo himself.

This isn’t anything new for a musical sensation of his class. It’s common knowledge how grueling studio session could be, lasting for almost the whole day. Different folks, different strokes is what people say, so this is probably Brymo’s way of easing his mind and getting a little tension and pressure off his shoulders.

On the other hand, he (Brymo) should set a good example for his young fans to follow, after all there are better and more healthy ways to relax than smoking weed. But who are we to judge? Do your thing, brother, but just make sure you don’t get caught up with the law.

The Chocolate City star posted the photo on Instagram, tagging it ‘It’s alright’. Few minutes later while we were all still trying to understand what was alright, he posted another  photo, this time making it clearer for us to understand. ‘Actually, I smoke a lot‘, he wrote as he posted a picture of a huge chunk of cannabis. 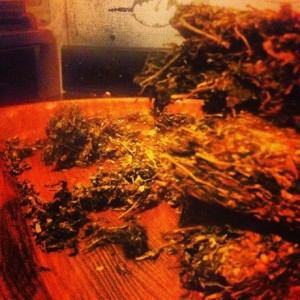