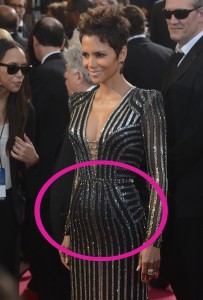 Former model and superstar actress, Halle Berry is pregnant. The 46 year old is expecting her second child. Berry already has a 5-year-old daughter, Nahla, with her ex-boyfriend, Canadian model Gabriel Aubry. This baby-on-the-way is her first with fiancé Olivier Martinez, 47, whom Berry has been dating since 2010.

Contrary to popular assumption, Berry didn’t undergo any fertility treatments to achieve this pregnancy. It is most remarkable for a woman of her age to get pregnant naturally but according to her, that’s exactly what happened. The conception occurred without any  special planning on her part .

The “Cat woman” star confirmed her pregnancy to on Friday and revealed that she was surprised to discover that she was pregnant. “I thought I was kind of past the point where this could be a reality for me,” said explained. “So it’s been a big surprise and the most wonderful.”

Berry is reportedly just three months along; according to TMZ, the actress was feeling sick and complaining that she had gained a little weight in late February, when she appeared at the Oscars in a body-hugging metallic-and-black dress by Versace — which hinted at a tiny bit of a belly.