Ba volleyed in a Juan Mata pass four minutes into the second half to send Chelsea into the semi-finals and deny runaway Barclays Premier League leaders United a Wembley clash with derby rivals Manchester City.

Petr Cech made a stunning 61st-minute save from Javier Hernandez and Chelsea held on to stay on course for a fifth FA Cup triumph in seven seasons, with City their last-four opponents on April 14.

For the Blues, beaten by Southampton on Saturday, it was a much needed fillip ahead of Thursday’s Europa League tie with Rubin Kazan and means a season of disharmony could end on a high.

All of United’s energies, meanwhile, are now on wrapping up the Premier League title after their hopes of a first double since the 1999 treble-winning season ended.

United appeared to be cruising into the last four with a 2-0 half-time lead at Old Trafford, but Chelsea responded to force a replay which was squeezed into a hectic calendar.

Both sides made seven changes for their second game in three days, with Wayne Rooney absent for the visitors.

United, who won at Sunderland on Saturday, reported Rooney picked up a groin problem on England duty but will be fit for the Manchester derby on April 8.

Rio Ferdinand, who withdrew from England duty and is the most unwelcome of visitors in this part of London, was in the United starting XI, but John Terry and Frank Lampard were only on the bench for Chelsea’s 55th game of the season and second of six games in 16 days.

The United manager was accused by Benitez of snubbing the Spaniard at Old Trafford in the original tie.

The opening 20 minutes were even, with United fielding Antonio Valencia at right-back and Phil Jones in midfield, the latter tasked with nullifying the threat of Eden Hazard in particular.

Chelsea were forced into an early change as Ashley Cole pulled up with a hamstring problem as Danny Welbeck rounded him in the 21st minute. Ryan Bertrand came on.

Hernandez, who has been prolific against the Blues with seven goals in 10 games, created space for himself in the area but slipped before he could shoot.

Despite the close attention of Jones, the impressive Hazard was Chelsea’s most dangerous outlet and he fashioned an opportunity for Ba to shoot, only for David de Gea to save with his feet.

As Terry warmed up along the touchline to abuse from the visiting supporters, David Luiz ballooned a free-kick over.

Nani shot narrowly wide from long range before Hazard and Mata combined and the Belgian fired over.

Hernandez had Cech in trouble after 41 minutes.

De Gea’s long kick found the Mexican, who, with Bertrand standing off, unleashed a swerving 25-yard shot which wrong-footed Cech but the goalkeeper was able to get a firm boot to the ball.

There was further defensive discomfort for Chelsea two minutes later as Luiz and Bertrand attempted to sweep up a loose ball.

Nani pushed his way by Bertrand, who reached to respond and missed, but referee Phil Dowd was unmoved by the Portuguese’s penalty appeal.

The Spaniard lofted the ball over the top of the United defence for Ba, who stole in behind Ferdinand to acrobatically volley it over De Gea.

With 29 minutes to go United thought they had equalised when Hernandez met a Welbeck cross, but Cech made a stunning save to palm the ball over. Had the ball hit Hernandez’s head, rather than shoulder, United would have been level. The Mexican could only smile ruefully.

Chelsea responded. Mata shot into the side netting before Hazard intercepted a loose Michael Carrick pass but could only drag his shot wide across goal.

It was an uncharacteristic miss and a let off for United, who sent on Ashley Young to join fellow substitutes Robin van Persie and Ryan Giggs for the closing 10 minutes.

After 88 minutes United again had the opportunity to force extra-time.

Young fed Patrice Evra, who pulled back a cross for Van Persie but the Dutchman fired well over.

After Mata shot at De Gea, Van Persie headed over a Young cross as United were left beaten and frustrated. 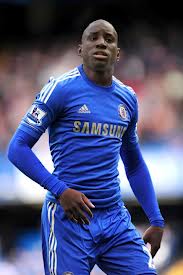