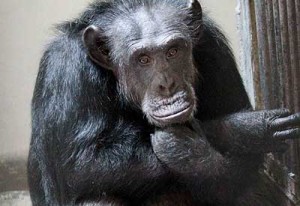 A chimpanzee created panic when she ran out of her housing at the Nehru Zoological Park in Hyderabad, in the Indian state of Andhra Pradesh.

21-year-old female Chimpanzee Suzi ran out of her enclosure at the Hyderabad zoo on Wednesday and triggered panic by attacking and injuring three workers within the zoo premises.

The people present in the zoo ran helter skelter as the giant animal ran from one corner to another before it was recaptured.

According to an official press release of the zoo, the animal bolted out of the night house by removing the latch, nut and bolt of the door when a worker was about to release it into an adjoining moat for public viewing.

As the animal came out, workers ran in panic. Meanwhile the animal moved towards the food court area and attacked three workers.

The injured were rushed to hospital for treatment and were later discharged.

Meanwhile veterinary staff at the zoo sedated the animal and moved it back to the enclosure. Zoo authorities said that the animal was now alert and normal.