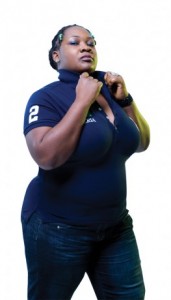 Boasting a unique skill-set which includes satire, self-deprecation, slapstick, mimicry, and freestyle skit, the stand-up comedienne revealed that she has found the chosen one and is on the path to the nuptials.

She will be taking her vows with her partner Ade on her birthday, Wednesday May 8 in Lagos, and the wedding will take place seven days after her Shades Of Comedy concert, holding at the MUSON centreon May 1.

She said: ‘I’ll say we’ve known since 2005 because he’s known me since then, and he’s tried several means to get my attention. Even though it didn’t happen, he kept trying and recently, a friend introduced us and we hit it off. He’s a very quiet and private person, and someone who loves and understands what I do. He loves entertainment too, I won’t say more than that for now…’