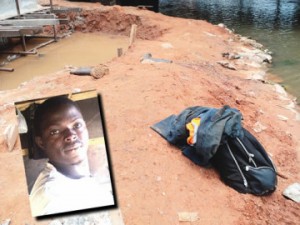 The body of a Nigerian working for Chinese Civil Engineering and Construction Company, CCECC, Asher Balogun, was discovered on Wednesday night, two days after he drowned in a river under the Asolo Bridge, Ikorodu, Lagos State.

Balogun, 33, who had been working as a steel fitter for CCECC since 2010 and was on a wage of N650 per day, had worked for 10 hours like his colleagues on that day before he met his untimely death at a construction project his company was working on.

A co-worker who craved anonymity as he was not allowed to speak to the press, said, Balogun decided to swim to cool his body before the incident occurred.

“It was on Monday afternoon when he came here together with four other workers. They brought steel and other materials that we were to use at the site.

“Afterwards, they all decided to swim here. I was told the foreman warned them not to swim far from the shore because they were not trained swimmers.

“Not long after, we started hearing screams of ‘help! help! help!’. I could see Asher’s (Balogun) hands as he tried raising them high above the waters but he suddenly went down and did not come up again.

“One fisherman around here and some other people tried to rescue him, but it was all in vain.

“We could not locate where he had sunk.”

Subsequent efforts to search and rescue him failed as they were unable to get him out, the source added.

“It was on Wednesday evening, around 8pm, after we all had closed that the security men here saw his bloated body on the river bank,” he said.

According to him, Balogun was a graduate, but had to become a steel fitter in the company due to the unemployment situation in the country.

The source, who is also a graduate of Banking and Finance, said he also worked as a carpenter in the construction firm.

The personnel manager of CCECC, Abdulwasii Akande, whos spoke to newsmen said that the company’s rescue team tried to save Balogun.

“It was unfortunate that all they could find was his dead body two days after he drowned.

“We called his next of kin who then informed his father. The family took it in good faith and we have been together till this morning.

“The father said he was waiting for the elder brother because the people in that community said whoever died by the river had to be buried there after some rituals.

Akande who said he felt the grief of the family however disclosed that although the company operates an insurance policy, he could not tell if it would extend to Balogun.