The controversial N4.5 billion Sunborn Yacht Hotel, brought from England and moored on the Lagos waters for over four years, has finally disappeared from the state after the controversies surrounding its ownership. 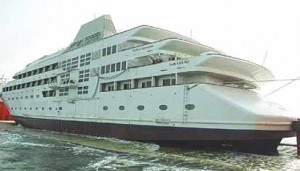 It will be recalled that the custom built yacht, with 102 elegant suites, arrived the Lagos waters in November 2008  and instantly became a cynosure of all eyes.

The yacht, expected to serve as a four_star hotel, was, however , bedeviled by controversies since its arrival which led to it abandonment and subsequent rusting away on the water-ways.

When Vanguard visited the quay, by the Army Officers’ Mess at Marina, Lagos Island Local Government Area, there was no sign that such expensive and eye catching structure ever berthed there.

Enquiries from the state government and even residents of the state yielded no result as no one could  say specifically what happened to the multi-purpose built yacht that moored on the state water for over four years.Commissioner for Tourism, Mr. Oladisun Holloway, when asked to comment on the development denied the state government’s knowledge of the where about of the supposed ‘first African luxury hotel on water’.

According to Holloway; “As citizens of the state can’t find it, so is the state government also. The government can’t say precisely where the Yacht is berthed at present.”

The commissioner reiterated that “the state government doesn’t have any commitment in the yacht. And I don’t know why the residents of the state should be interested in whereabouts of the Sunborn yacht.

The four-star hotel, originally owned by the City of London, was conceptualised as a leisure and  business centre to service the higher echelon of Lagos society. Mr. John Smart, a boat operator, said he could not say accurately the whereabouts of the four storey multi-purpose built yacht, since removal last month.

According to Smart; “I cannot say the date when it was removed but all we saw on one fateful day was a large number of people who crowded the Sunborn Yacht and towed it away with another ship.  They didn’t inform anyone where they will be taking the yacht to and since then we were yet to see it.”

So, the question on the lips of residents and concerned citizens which has remained unresolved is; “where is the Sunborn Yacht Hotel and who is behind the deal”. Time will tell.