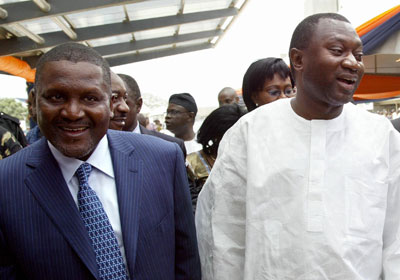 Aluko said this in Ode Ekiti on Saturday in an interview with journalists.

He recalled that prominent politicians across the globe, including former United States President, George Bush among others, were some of those, who were highly successful in business before their foray into politics.

Aluko, who is seeking to contest the 2014 gubernatorial poll in the state, said corruption would be reduced if wealthy people aspire for political positions.

Aluko said,  “Politics should not be seen as a  profession.  In America, where we copied our presidential system from, some of their great politicians like George Bush, George W. Bush,  and Al Gore made it big in business before coming into politics.

“George W. Bush was into oil and gas. What these people went for in politics is service and not the wealth  they would  amass. If people like Aliko Dangote and other big businessmen go into politics, they would not be desperate like those who see political offices  as means to corruptly enrich themselves.”

According to him, honest and wealthy people should not shy away from holding political offices, saying their presence in politics, will help the country overcome the problem of corruption in public places.

The former lawmaker also noted the party’s resolve to return to the Ekiti Government House in 2014.