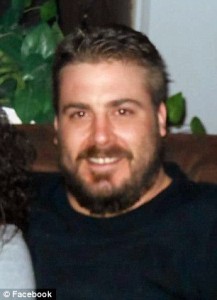 A Des Moines man accused of spiking cookies with methamphetamine in an effort to discredit his wife has been charged with perjury. Filing charges Friday, King County prosecutors contend Chad M. Holm gave the cranked-up cookies to his 5- and 7-year-old sons before forging a drug test result to obscure his own meth use. Both children subsequently tested positive for meth.

Holm, 37, and the woman had been married and using methamphetamine together for several years before they split up in April 2011, a Des Moines detective told the court. Since then, they’ve been fighting over access to their children, who were placed with Holm while his ex-wife underwent voluntary drug treatment.

The children’s mother had been clean for nearly a year in September when she failed a drug test. Concerned about the positive result, the woman recalled a pair of unappetizing cookies she’d eaten with her children the day before.

According to charging papers, the woman and a court-appointed monitor picked up the children at Holm’s home that day. Their 7-year-old son brought two pink-frosted cookies that Holm made for his ex; the woman and her 5-year-old son split one cookie, which they were unable to eat because it “tasted terrible.”

On a subsequent drug test, the 5-year-old tested positive for meth, the Des Moines detective continued. The woman suspected Holm or his girlfriend were trying to sabotage her perfect drug test record before an upcoming child custody trial.

Lab tests on leftover frosting confirmed the presence of methamphetamine on the cookies, the Des Moines detective continued. Both children also tested positive for methamphetamine. Confronted by police, Holm denied spiking the cookies with meth, according to charging papers. He also denied using or possessing meth, and tried to explain away a recent failed drug test.

“Holm told me the positive test … was the clinic’s fault because they made a mix up or because of (his ex’s) meddling,” the Des Moines detective told the court. Suspecting Holm or his girlfriend may have poisoned the boys, police combed through drug test results submitted by Holm as part of the custody lawsuit.

Reviewing those court records, investigators found a negative drug test filed in October by Holm. Detectives contacted the center that conducted the test and found Holm had in fact failed; prosecutors contend Holm forged the test results before submitting them to the court. For filing the apparent forgery, prosecutors have charged Holm with second-degree perjury.

No one has been charged in the apparent drugging of the young boys. King County Prosecutor’s Office spokesman Ian Goodhew said prosecutors cannot presently show Holm or his girlfriend put meth in the cookies.
“We are unable to file charges at this time against Mr. Holm or his girlfriend for providing the methamphetamine to the children because we cannot prove the chain of custody of how the meth was placed in the cookies, who made the cookies and who, when, where or how the meth was given to the children,” Goodhew said in a statement.
Holm is not currently in jail.