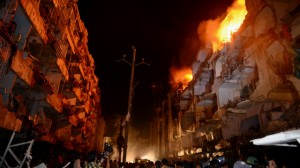 The bomb went off on Friday close to the office of the Awami National Party’s (ANP) candidate in the city’s western neighbourhood of Mominabad, local police said.

It was an improvised explosive device planted in a Suzuki car, police spokesman Imran Shaukat said.

Witnesses said the blast was heard several kilometres away and damaged nearby shops and houses.

Bashir Jan, a local ANP candidate, was reportedly the target of the attack. He was set to address a meeting in the impoverished area, which is home to many ethnic Pashtuns, police said.

Pakistani Taliban spokesman Ahsanullah Ahsan claimed responsibility for the attack in a telephone call to the AP news agency from an undisclosed location.

The attack was the latest violence ahead of historic elections on May 11, and the second to hit the port city in less than 24 hours.

Five people were on Thursday killed when a bomb exploded outside the office of the secular Muttahida Qaumi Movement (MQM) party, police said.

The banned Tehrik-i-Taliban Pakistan had claimed responsibility for Thursday’s attack, according to the Dawn newspaper.

The armed group has reportedly been targeting members of the three parties, which are perceived as secular.