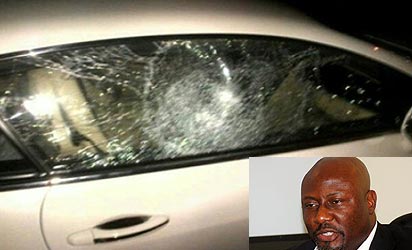 The purported assassination attempt on former House of Representatives member, Dino Melaye, has been dismissed by Police authorities in Abuja yesterday.

The commissioner of police in Abuja Femi Ogunbayode said Melaye actually reported gun attack on him after leaving the National Hospital at about 9:30 on Monday and claimed it was an assassination attempt.

It would be recalled that Melaye claimed he was attacked by gunmen who opened fire on his car Monday night as he drove out from the National Hospital, Abuja.

However, the police authorities while dismissing the allegation said a thorough search of the scene by forensic experts did not indicate a presence of pellets or empty bullet shells.

He said that further investigation showed that Melaye’s car window is not bullet proof; and if there was a gunshot it would have penetrated straight into the car and he would have been shot dead. He said the window has a sign of a crack on it, which could have been a result of the loud sound.

“And how then is it possible for you to be in your car wind up enjoying the air condition and a very cool music and then you hear a gunshot?” he asked.