Manchester United published the official attendance for the home game against Southampton as 75600 on the 30th of January, but police data said the figure was only 59666.
In December, the Premier League leaders reported over 75000 in attendance for the games against Sunderland, Newcastle and West Brom, while the police figure were 64294, 64996, and 66847 respectively.
When Greater Manchester Police were contacted by Sportsmail, a news tabloid in Britain, earlier on Friday a spokesman said the figure had not been released by them, contrary to reports on the fans’ website. The Redsaway fans’ website disagreed with the police, claiming to have received the police data under the Freedom of Information Act.
For safety purpose, Greater Manchester Police keeps its own record of the actual number of people who pass through the turnstiles.
Under FA rules, United as the host club, must publish the ‘official attendance,’ including everyone who bought a ticket whether they were in attendance or not.
Still on the disparity in the publications, there are claims Old Trafford (OT) was not even half- full for the Capital One Cup tie against Newcastle in September. The police recorded the number of people that went through the turnstiles at 33409; United published 46358. In the next round against West Ham, the police put down the crowd as 51724, whereas United recorded it as 71081.
One of those matches fresh among United fans’ memory is the return leg against Cluj in the Champions League in December, having already qualified for the knockout stage a fortnight before the tie; the crowd was announced as 71521. In fact, the police say it was 46894.
The club was surprised at the large discrepancy between the two sets of figures, even considering the inevitable facts; where some of the 55000 season- ticket holders are not able to attend every game or must have given the ticket to someone.
According to the club some areas in the stadium are not scanned for the sake of logistics, and that there are 9000 executive seats at Old Trafford. However they still can believe the numbers of entrants who were not scanned should be that high. 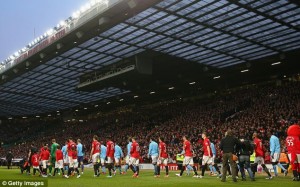