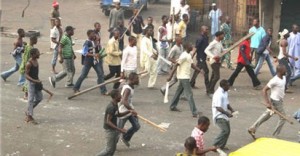 The refusal of a police officer to pay N300 transport fare from Ado Ekiti to Akure at the weekend led to a violent clash between commercial drivers operating under the umbrella of the National Union of Road Transport Workers, NURTW, and men of Ekiti State Police Command.

The driver of the 18-seater bus was said to have insisted that the cop must pay his fare like other passengers, but instead of obliging, the policeman, who was said to be armed, allegedly fired a shot at the bus shattering the rear windshield, which attracted other drivers from nearby, who joined their colleague to beat up the policeman.

After the telling-off by the other drivers and the co-passengers, the policeman, a Sergeant, was said to have reported the case to his colleagues at his police station.

The policemen were said to have forced the drivers and commuters at the park to flee into the bush with sporadic shooting, as they dealt with the drivers that were not fortunate to escape.

A source close to the scene of the incident said that as the policemen were firing the shots, the commercial drivers were also replying with dangerous missiles like stones, broken bottles and iron rods. They also wielded cutlasses and axes.

The Special Assistant to the Governor of Ekiti State on Internal Security, Mr Deji Adesokan, was said to have visited the park later in the day and pleaded with the drivers to give peace a chance, with a promise to take up the matter personally with the governor.

Confirming the incident, public Relations Officer of the Ekiti State Police Command, Mr Victor Babayemi said investigating into the cause of the matter was still on.

“The Command is aware of the incident, but the cause of the matter is still sketchy. We are going to give you the full detail as soon as we conclude our investigation,” he said.