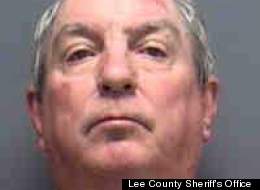 A man from Bonita Springs, Fla., allegedly broke into a zoo and cut the locks on nearly every cage — including those of a wild boar, mountain lion, and bobcat.

Steven Trew, 58, was arrested Monday morning for burglary and damaging the property of Everglades Wonder Gardens,WINK News reported. He allegedly admitted to being drunk when arrested.

Jack Wollman, a zoo employee, said that when he arrived at work on Monday, he noticed a deer, pigs, and birds out of their cages, according to The Associated Press. He and the zoo’s owner, David Piper, also found the property’s back gate sawed open.

“It was pitch black,” Wollman told the AP. “Then I heard the flamingos and when you hear flamingos you know someone is there. I saw a guy by the barn area and chased him to the parking lot.”

Wollman allegedly tackled the suspect — later identified as Trew — and detained him until authorities arrived.

Luckily, none of the dangerous animals left their cages, The News-Press reported, but one deer was killed on a nearby parkway, and one deer remains missing.

Piper, the owner, said that Trew allegedly committed the crime because he was angry that the zoo is set to close on April 21.