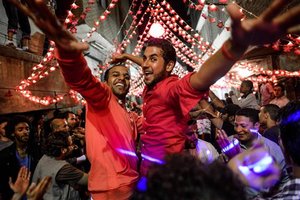 An Egyptian prosecutor who cited the Quran as he ordered police to flog a man with 80 lashes for public drunkenness has been suspended and put under investigation, the prosecutor-general’s office said.

There had been growing fears in the North African country that the Muslim Brotherhood’s Egyptian president Mohammad Mursi is slowly empowering a religious system, but the order by Anani might have done a bit in dousing the doubts of those who believe Mursi was planning to start using conservative interpretations of Islamic law.

Mursi’s Muslim Brotherhood group has emerged as the most powerful political force in Egypt since the uprising that ousted longtime autocrat Hosni Mubarak two years ago. However, unrest has blossomed even under him with many of the opinion Mursi’s government may not be better than Mubarak’s judging with the spate of violence and number of lives lost since he was elected into office.

Public intoxication has long been a criminal offense in Egypt just as it is in most countries. Penalties range from small fines to around three months in prison.

Egypt’s penal code does not mention flogging. Years ago police had the right to lash disobedient prisoners, but even that has been banned, and that made the prosecutor’s order really disgusting for Egyptians.

More so, the sale and consumption of alcohol in Egypt is legal, and local beer is a common feature of street weddings in popular quarters.

The man who escaped the lashing, Mohammad Eid Hassan from the province of Minya, said he was arrested for public intoxication after attending a friend’s wedding where beer was served.

“In such events I cannot refuse drinks because it is considered rude, even though such practices are taboo,” Hassan who said he was questioned by prosecutors near his hometown of Matai, a city some 180km south of Cairo, for three hours, told Associated Press, adding that the lashing was ordered after a heated argument with them.

“I told his highness the prosecutor to go ahead and carry out the lashing,” he said defiantly. “I am not guilty if something like this to happens to me.”

Anani who ordered the flogging cited verses of the Quran to back up the punishment with Shariah law.

One of the verses warns Muslims against alcohol, gambling and idolatry. It states that alcohol is the workings of the devil.

Another was the part that states that those who do not carry out God’s rule are infidels, unjust and transgressors.

Police had refused to carry out the order and instead reported it to their superiors in the Interior Ministry, who then contacted the prosecutor general’s office where the order was overturned.