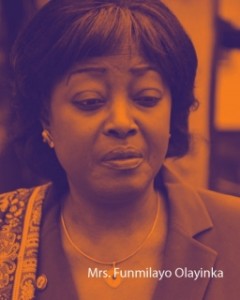 Two of the sources revealed that Mrs. Olayinka has been diagnosed with breast cancer.

The deputy governor’s prolonged absence from public events had fueled rumors that she had passed away. However, when a correspondent of SaharaReporters sent a text to Governor Fayemi of Ekiti four days ago inquiring about speculations of his deputy’s death, the governor wrote back denying the rumors. In his text, Mr. Fayemi stated that Mrs. Olayinka was alive.

Even so, Mr. Fayemi failed to respond to follow-up texts asking about the deputy governor’s whereabouts and health condition.

In interviews with several government sources, SaharaReporters learned that Mrs. Olayinka had been unable to perform official public functions due to her serious ailment. “Her Excellency, the deputy governor, is suffering from cancer,” said one of our sources. He added, “We’re all praying God to heal her and make it possible for her to return fully to serving the state.”

Our  sources disclosed that Mrs. Olayinka was receiving treatment at St. Nicholas Hospital in lagos. However, they  stated that they could not reveal the stage of her cancer.

One source disclosed that the governor had warned top government officials not to discuss the deputy governor’s health crisis. “The governor is in touch with her and with members of her family and is offering every possible form of assistance in addressing her cancer,” the source stated.

The government officials we spoke to were cagey about the deputy governor’s location. One of them said the ailing deputy governor “is very much in Nigeria,” even though he would not disclose whether she was within the state or outside. A different source also stated that the deputy governor had been discharged from St. Nicholas hospital and is currently recuperating at her Lagos home with her family.

A chieftain of the Peoples Democratic Party told SaharaReporters that he sympathized with the sick deputy governor, but he criticized the Fayemi administration for concealing information about her condition from the people of the state. “Governor Fayemi and his group raised their voices in protest when [former President] Yar’Adua was flown to Saudi Arabia for treatment without Nigerians receiving information or updates about his condition. Today, the same Fayemi is behaving like the cabal that surrounded Yar’Adua,” said the source. He added, “Mrs. Olayinka is a public official.

If she is too sick to attend to her official duties, then the good people of Ekiti State deserve to be told.”