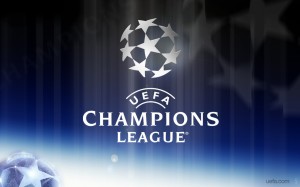 Europe was agog with stars on Tuesday and Wednesday. It was the first leg of a two legged quarter final in the European Champions League round of eight. On Tuesday, Paris Saint German played host to FC Barcelona at the magnificent Parc des Princes Stadium in Paris. This saw the return of Zlatan Ibrahimovich against his former employee. The decision to start David Beckham ahead of Marco Verratti was the surprise move by Carlo Ancelotti many attributed to form. It took the Catalan giants 38 minutes to unlock the PSG defense; a Barcelona corner had been partially cleared when Dani Alves stared it back into the area with a well taken outside of the boot pass. PSG’s defense were trying to push out then forgot to tame Lionel Messi. He immediately latched onto the pass with a volleyed finish that stayed low and went past Sirigu into the net. Barcelona had their lead, and an away goal advantage. Later in that game, a free kick came in at the Barcelona half of the pitch, Thiago Silva Thumped a header off the near post, and an offside Ibrahimovich swept in the rebound; PSG- one, Barcelona- one. Later on in the game, Goals from Xavi and a late leveler from Matuidi meant Barcelona will carry a two away goals advantage into the Camp Nou.
Another match played on Tuesday was Bayern Munich vs. Juventus at the Allianz Arena. It took the home team a minute to distabilise The Old Ladies of Turin’s formation after taking advantage of two errors from Juventus’ veterans, Andrea Pirlo and Arturo Vidal, with the later deflecting a long range short by David Alaba into the net. Another goal yet controversial from Thomas Muller was sufficient enough to see Bayern proceed to the second leg with two goals advantage.
On Wednesday saw Real Madrid take on Galatasaray at the Bernabeu. It was another opportunity for both Wesley Sneijder and Didier Drogba to face their former tutor Jose Mourinho. Cristiano Ronaldo proved to be more potent in attack than Albert Riera, this was the case when a wonderful pass from Mesut Ozil sets him up, slicing the Galatasaray defense into two for Ronaldo to lift a brilliant lob over Fernando Muslera (the Uruguayan goalkeeper) and into the far corner of the net.
Not long after Ronaldo opener, Didier Drogba, after making a short work off Raphael Varane, turning the youngster with ease wastefully blew his shot high and wide. Michael Essien was the provider of the second goal after the Ghanaian curled in a fine cross for Karim Benzema to clinically stop and finish it at the back post. With Real Madrid two goals up, the visitors had to pull off Wesley Sneijder at half time and switched to a more defensive 3-5-2 formation.
Things looked promising a bit for the visitors before Gonzalo Higuain made it 3- 0. It was a set piece, curled accurately into the eighteen yard by Xabi Alonzo, before Higuain haven beaten Dany Nouenkeu flicked the ball past Mouslera with a fine header. Galatasaray had had much of the game, some sluggish defending and poor finishing had cost them the tie. Later on, Burak Yilmaz, after a very frustrating half was dashing through the area when Sergio Ramos trod on his foot to stop him, the Referee eventually booked Yilmaz for diving, this translated into suspension from the second leg. Another suspension was Sergio Ramos who stupidly kicked away the ball after the Referee had blown for an infringement.
All in all, Galatasaray will proceed to the second leg with less motivation and enthusiasm after seeing themselves get behind in the game three times without any good response. The loss of their top notch striker will also add more salt to the wound. In the other game of the day Malaga played a goalless draw at home to Borrusia Dortmund, which means the Germans will have it all to do in Germany next week.