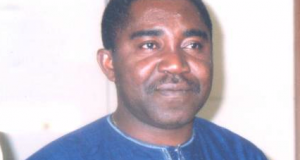 He died in a London Hospital after a brief illness.

Ajene was George Akume’s deputy for eight years before he became a Senate Minority Leader in the upper legislative chamber.

Shortly after the sad news of his demise filtered into town, many sympathizers trooped into his residence and wept uncontrollably.

Governor Gabriel Suswam  who reacted to Ajene’s death through his Special Adviser on Electoral Matters, Hon. Chia Addingi, described the deceased as a fine gentleman who served the state and his people diligently and will forever be remembered.

In a similar development, Jacob Ajene, the brother to the deceased, said the former deputy governor’s death had thrown the family into total confusion just as he said a long vacuum has been left in the family of the Ajene, who are known for their simplicity.