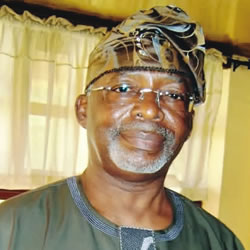 Comments attributed to founder of the Oodua Peoples Congress President, Dr. Frederick Fasehun, in response to the Action Congress of Nigeria’s earlier outcry over attempts to destabilise the country, especially the South-West region, has been described as “worrisome and revealing”.

In a statement on Tuesday by ACN’s National Publicity Secretary, Alhaji Lai Mohammed, the party said Fasehun’s response to its comments had confirmed its initial fears which prompted the security alarm in the first instance.

The ACN said, “Dr. Fasehun’s statement has confirmed our worst fears. We never imagined we would be proven right so fast. First, he threatened to unleash violence on those whose offence, as it were, was alerting the country to the evil machinations of those, who are scheming to destabilise the country to achieve their selfish ends.

“Secondly, the verbal punches he threw at ACN leaders in general and the party’s spokesman in particular, and his undisguised threat of violence against a party that has never resorted to violence for whatever reason, opened a window deep into his mind, to his unbridled hatred for the party, and all it stands for and to the fact that he is indeed a willing tool to be used.

“It never occurred to Fasehun that Chief Obafemi Awolowo, the legend whose party he (Fasehun) is now seeking to revive in a gratuitous and self-serving act, never believed in violence and never lent himself to be used against his own people, no matter what juicy carrot was dangled before him.”

ACN added, “Thirdly, when his response to the pipeline contract issue is stripped of all semantics, he simply owned up to our accusation that the contract award is closely linked to the attempt to revive the UPN and, when viewed against his threats, showed that indeed, those, who want to plunge the South- West into crisis, have found a willing tool to be used.

“Suffice it to say that clearly written in the statement we read out at our press conference is that freedom of association is guaranteed by the constitution of the Federal Republic of Nigeria. However, that freedom should not be abused by those seeking to exploit it for the sole purpose of attacking democracy itself.”

The party, which noted that Fasehun had placed himself in an awkward position, reaffirmed that its leaders would not be deterred from speaking on any issue, especially on “the do-or-die antics of those at the helm of the nation’s affairs”.

It added, “This position is not where a self-respecting elder, a patriot without patronage and a democrat without prodding ought to be found.”