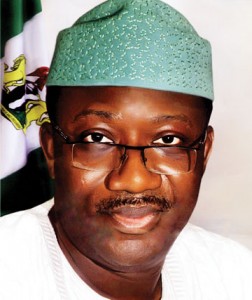 Ekiti State Governor Kayode Fayemi, yesterday, condoled with the family of a seven-year-old boy Olamide Ayeni, who was drowned in the flood caused by Sunday night’s downpour in the state capital.

Reports say the boy was on an errand with his elder sister, identified as Faith, but missed his step and fell into a heavily flooded drain while returning home in the rain that lasted over six hours in Ado-Ekiti

Governor Fayemi said the incident was very painful, noting that he understood what the parents of the boy were going through, having lost his deputy.

“The loss of any of our children gives one a lot of pains. This is a very young kid, seven years old, an innocent person who has a good future ahead and now we have lost him to an avoidable tragedy. It was a terrible loss. Having lost an older person, my deputy, I know the pain the parents must have felt for losing this child. It is a loss to the family and to the state.”

Fayemi assured that the government would not rest on its oars in making the environment safe for every resident, while he urged adults and parents to do everything that would guarantee the safety of their children and wards, adding that the child might have been rescued if an adult were to be at the scene of the tragic incident.

“I will advise all of us, especially the adults to always do everything to guarantee the safety of our children and from what the parents described to me, it could have happened to any child. The drainage was overflown with water and the kid did not know that the place was a drainage because water was already full at the time.

“We must do everything to protect our children. Government will do its duties and ensure that proper drainage is put in place. Incidentally, this is an area where we have just done the road unlike before when there was no drain at all, it would have been worse,” Fayemi said, as he prayed to God to grant the parents of the boy fortitude to bear the loss.

The body of the boy was yet to be found as at the time the governor visited his family.