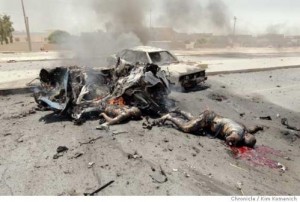 In a strange twist to terrorism, a female suicide bomber blew herself up outside a hospital in a lawless tribal area of northwest Pakistan on Saturday, killing at least four people and wounding four others, officials said.

The attack took place in Khar, the main town of Bajaur tribal district bordering Afghanistan where the military has carried out several offensives against Al Qaeda-linked Taliban militants.

“At least four people were killed and four others were wounded in the blast outside the main gate of the hospital,” Mohammad Riaz, chief doctor at the government hospital, told AFP.

Local administration official Abdul Haseeb confirmed there were casualties, and that it was a female suicide bomber.

“It was a female suicide bomber, about 18-20 years old, we have found her legs and head,” he said.

The dead included a security personnel, a hospital worker and two civilians, he added.

Pakistan has lost more than 3,000 soldiers in the fight against homegrown insurgents but has resisted US pressure to expedite action in eliminating havens used by those fighting the Americans in Afghanistan.