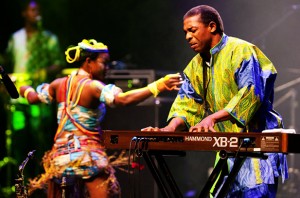 Handling relationships hasn’t been one of Femi Kuti’s strong suit….…

The Afro-beat legend who’s very active on Twitter got tweeting with his fans on marriage issues and being faithful in a relationship.

In a recent interview with a tabloid newspaper, the 50 year old Afro-beat legacy Femi Kuti, is quoted saying

When queried about his statement on the twitter, he responded;

“being faithful isn’t 1 of my objectives in my life at this point. But this is my way I’m not tryin to influence any1. I’ve said it a couple of times I don’t like to discuss my marriage, as we hv a Son. And I don’t mind taking the blame”.

His stand doesn’t come as a surprise however as he stated in an interview in 2010 that he doesn’t believe in marriage.

Femi Kuti who is presently on of the judges on ‘Nigerian Idol’ was once married to Funke Kuti. The divorced couple separated after Femi Kuti made allegations of infidelity on Funke’s part. They had a son together, by name Made.