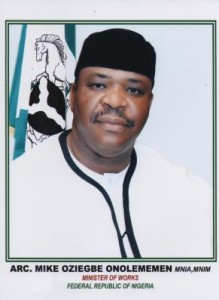 Minister of Works, Arc. Mike Onolememen has made it known that the Federal Government requires about N416billion annually for highway projects across the country.

The minister who along with his Minister of State, Ambassador Bashir Yuguda, briefed the national leadership of the Peoples Democratic Party (PDP) on his ministry’s achievement in the last one year, in Abuja, on Tuesday, said out of the annual funding requirement, only N116billion was made as budgetary provision in 2012 leaving it with a shortfall of about N300billion.

Out of this budgetary provision, only N102 billion or 77 per cent was released with a shortfall of N31 billion he said, adding “the finance of road projects has been through budgetary provisions which have been too inadequate to fund the projects and most times not fully implemented.”

Onolememen, however, revealed that the Subsidy Reinvestment and Empowerment Programme (SURE-P) had been able to bridge the funding gap to some extent while the ministry was exploring alternative sources of funding for the projects: “The enhanced funding from the SURE-P has helped to reduce the funding gap. The ministry is exploring alternative ways of funding Highway infrastructure, including annuity contracts, borrowing from Multilateral Agencies and Pension fund for key Highways infrastructure, floating of Road Bonds for Highway projects,” he said.