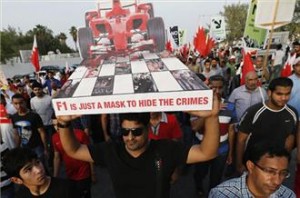 The Bahrain Formula One race has gone ahead despite ongoing clashes between Bahraini police and anti-government demonstrators in the capital, Manama.

Police fired birdshot and tear gas on Sunday to contain simmering resentment at a deadly crackdown by the Sunni royal family on Arab Spring-inspired protests that erupted two years ago led by the kingdom’s Shia Muslim majority.

Sunday’s clashes had broken out at Al Jabrya secondary school, one kilometre from the centre of the capital, with students barricading themselves in, and burning tyres.

They are said to be protesting because a fellow student was removed from the school last week by plain clothes police. That later died down and deteriorated into sporadic clashes with police and protesters.

Both government and opposition parties have repeatedly urged students not to take up the political protest, but the students went ahead with protests regardless.

Clashes had also been reported in Barbar after four police cars had entered the village to paint over anti-Formula One graffitti, but that no injuries had been reported.

Bahrain’s Crown Prince Salman al-Khalifa said more than 15,000 people visited the circuit on Friday and more were expected on Sunday, despite the unrest.

He dismissed the suggestion the government was using the race to paper over human rights abuses.

“What I would like to say is let’s focus on what’s positive, let’s build upon the platform that we have, and let’s celebrate this event with Bahrainis who are really passionate,” he told reporters on Saturday at the Sakhir desert circuit, roughly 30km southwest of Manama.

But the Crown Prince admitted that talks between the government and opposition groups, aimed at breaking the political deadlock were moving too slowly.

Crown Prince Salman is a driving force behind talks between the government and main opposition groups aimed at breaking the political deadlock. He described the race as an opportunity to transcend national differences.

However, in contrast to the Shia-inhabited villages where the clashes took place, there was little evidence of unrest in central Manama or around the race circuit at Sakhir, according to the AFP news agency.

Spectators at the circuit on Saturday for race qualifying enjoyed a carnival atmosphere, watching music and dance performances and other activities geared towards children.

Watched by millions around the world, the opposition has hoped to use the race to put the spotlight on its campaign.

The government on its part has aimed to show unity and portrayed the protesters as trying to undermine Bahrain’s international image.