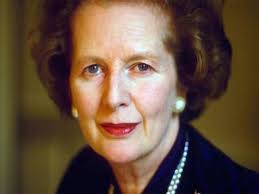 The woman made famous by her no-nonsense attitude, fearlessness and outspokenness will be forever remembered in history as the first female British Prime Minister, and so far the only one, who is also Britain’s greatest post-war prime minister.

She will forever be remembered for her great feats and some great words she spoke in her 87 years on earth.

Read some of her quotes below

1. You and I come by road or rail, but economists travel on infrastructure.

2. We were told our campaign wasn’t sufficiently slick. We regard that as a compliment.

3. Platitudes? Yes, there are platitudes. Platitudes are there because they are true.

5.The battle for women’s rights has been largely won.

6. I am in politics because of the conflict between good and evil, and I believe that in the end good will triumph.

7. There is no such thing as society: there are individual men and women, and there are families.

8. Pennies do not come from heaven. They have to be earned here on earth.

9. Standing in the middle of the road is very dangerous; you get knocked down by the traffic from both sides.

10. It pays to know the enemy – not least because at some time you may have the opportunity to turn him into a friend.

12. Plan your work for today and every day, then work your plan.

13. I’m extraordinarily patient provided I get my own way in the end.

14. Being prime minister is a lonely job… you cannot lead from the crowd.

15. You don’t tell deliberate lies, but sometimes you have to be evasive.

16. If you want to cut your own throat, don’t come to me for a bandage.

17. No one would remember the Good Samaritan if he’d only had good intentions; he had money as well.

18. It may be the cock that crows, but it is the hen that lays the eggs.

19. One of the things being in politics has taught me is that men are not a reasoned or reasonable sex.

20. What Britain needs is an iron lady.

21. Nothing is more obstinate than a fashionable consensus.

22. I don’t mind how much my Ministers talk, so long as they do what I say.

23. If you lead a country like Britain, a strong country, a country which has taken a lead in world affairs in good times and in bad, a country that is always reliable, then you have to have a touch of iron about you.

24. People think that at the top there isn’t much room. They tend to think of it as an Everest. My message is that there is tons of room at the top.

26. Being powerful is like being a lady. If you have to tell people you are, you aren’t.

27. Disciplining yourself to do what you know is right and important, although difficult, is the highroad to pride, self-esteem, and personal satisfaction.

28. I always cheer up immensely if an attack is particularly wounding because I think, well, if they attack one personally, it means they have not a single political argument left.

29. What is success? I think it is a mixture of having a flair for the thing that you are doing; knowing that it is not enough, that you have got to have hard work and a certain sense of purpose.

30. If you just set out to be liked, you would be prepared to compromise on anything at any time, and you would achieve nothing.

33. I am extraordinarily patient, provided I get my own way in the end.

34. Democratic nations must try to find ways to starve the terrorist and the hijacker of the oxygen of publicity on which they depend.

35. I do not know anyone who has got to the top without hard work. That is the recipe. It will not always get you to the top, but should get you pretty near

37. To cure the British disease with socialism was like trying to cure leukaemia with leeches.

38. I usually make up my mind about a man in ten seconds, and I very rarely change it.

39. There can be no liberty unless there is economic liberty.

40. It is not the creation of wealth that is wrong, but the love of money for its own sake.

41. I love argument, I love debate. I don’t expect anyone just to sit there and agree with me, that’s not their job.

42. You may have to fight a battle more than once to win it.

43. If you set out to be liked, you would be prepared to compromise on anything at any time, and you would achieve nothing.

44. A world without nuclear weapons would be less stable and more dangerous for all of us.

45. I’ve got a woman’s ability to stick to a job and get on with it when everyone else walks off and leaves it.