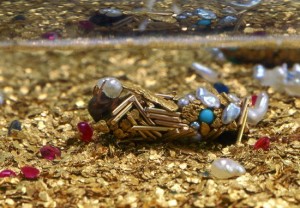 French artist Hubert Duprat supplies Caddisfly larvae with precious materials like gold flakes, opal, turquoise, rubies, and pearls which they use to build protective casings which can be strung and worn as unique pieces of jewelry.

Caddisfly larvae live in rivers and streams, where they collect natural materials like gravel, sand, twigs and just about anything else they can carry to build elaborate armors that provide protection from various threats. The larvae glue all the debris with silk excreted through salivary glands located near their mouths. Using this knowledge, Hubert Duprat places the Caddisfly larvae in climate-controlled tanks and replaces their usual building supplies with precious and semi-precious materials and lets nature take its course.

This unique collaboration between art and nature yields impressive results in the form of one-of-a-kind gilded sculptures that sometimes look a lot better than some designer jewels. The French artist views his intriguing project as a collaborative effort, and says “it is their work as much as it is mine.”

Having been a naturalist in the past, Duprat knew that Caddfly larvae were remarkably adaptable, so in the early 80s he started collecting them from their natural environments and took them into his studio. There he gently removed their own natural cases and put them in tanks filled with his own materials, from which they began to build their new protective sheaths. At first they only had gold flakes to work with, but then he began adding all kinds of other shiny stones including turquoise, coral and lapis lazuli, as well as sapphires, pearls, rubies, and diamonds.