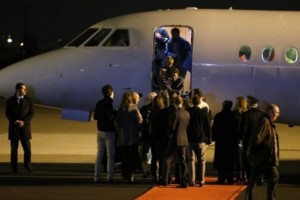 French family of seven abducted by the Nigerian Islamist sect Boko Haram arrived in Paris early on Saturday, welcomed by relatives and French President Francois Hollande following their release from two months of captivity by the sect.

The Moulin-Fournier family, which includes four boys aged between five and 12, flew in from Cameroon on a French government Falcon jet with Foreign Minister Laurent Fabius.

“It’s over, we made it,” said Tanguy Moulin-Fournier, father of the family. “I am very happy to be back in France, it’s a great moment.”

“France, as a family, is relieved and happy,” Hollande said. “We are overcome with joy.”

The family took off from the Cameroonian capital Yaounde late on Friday, having earlier met President of Cameroun Paul Biya.

The French government didn’t say much on how their release was secured, but said that no ransom was paid and there was no military operation to free them.

“The French authorities carried out their duty discreetly,” Hollande said at the airport, thanking Cameroon and Nigeria for their help in resolving the crisis “with a special thought for Paul Biya…who played an important role these past few days.” 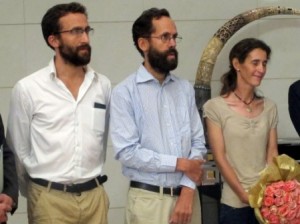 Tanguy and Albane Moulin-Fournier, their four children and Tanguy’s brother, Cyril, were kidnapped in Cameroon on February 19 while visiting a national park in the north of the country.

The Moulin-Fourniers had been in Cameroon since 2011, following Tanguy’s posting to the country by his GDF Suez employer. His brother Cyril had come to visit the family from his home in Spain.

Following their abduction, the hostages were taken to neighbouring Nigeria and were held by Boko Haram, an Al-Qaeda-linked Islamist group blamed for a string of deadly attacks since 2009 in an insurgency in northern Nigeria.

But on Thursday night, in a surprise development, they were handed over to the Cameroonian authorities, thinner and exhausted but otherwise in good health.

“We are all very tired but normal life will now resume,” Tanguy said in the capital Yaounde. “The conditions in which we were held were very difficult. It was extremely hot. But we did not have any serious problems.

“We are alive and we are infinitely happy to be free.

“It has been very long and difficult, it was hard psychologically and we had some very low moments. But we stuck together and that was crucial. As a family, we kept up each other’s spirits.”

Fabius said they had been freed overnight “in an area between Nigeria and Cameroon”.

Hollande has insisted that France had paid no ransom and his aides said the liberation of the hostages had not involved the use of force.

The family’s abduction occurred as France was deploying thousands of troops to fight Islamic extremists in Mali, another former French colony in the region.

The Moulin-Fournier family were visiting the Waza National Park in northern Cameroon, near the border with Nigeria, when they were kidnapped.

Tanguy Moulin-Fournier worked for the French gas group GDF Suez in Yaounde. He and his wife, and their four sons, Eloi, Andeol, Mael and Clarence, had been based there since 2011. Cyril Moulin-Fournier was visiting from Barcelona.