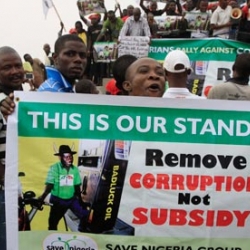 The Save Nigeria Group has warned the Federal Government against contemplating removing subsidy on petroleum products, warning such action will trigger a national protest bigger than the January 2012, Occupy Nigeria protest.

The spokesman for the SNG, Yinka Odumakin, said Nigerians were awaiting the day the Federal Government would announce the removal of the subsidy as it did in January 2012.

“We also heard Doyin Okupe (Senior Special Assistant to the President on Public Affairs) when he said it would not be done without consultation. Whichever way they do it, Nigerians are ready. The action of January 2012 was only suspended and the people are waiting for them if they try to increase their suffering.”

Odumakin who decried the non-conviction of Nigerians indicted over the N3tn stolen in the name of subsidy, stated that “Some presidential aides stood as sureties for those who had been charged to court in respect of the subsidy corruption when they were granted bail. If they think that Nigerians are fools, then they must be dreaming and the dream will be met with fire. Let them try it; the people are waiting for them.”