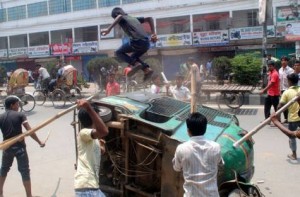 Thousands of garment factory workers in Bangladesh have protested for the second day over the deaths of more than 300 workers after a building collapsed.

Rescuers also found 50 more workers on Friday evening, as they continue to search for large numbers of survivors believed to be still trapped inside the rubble.

Widespread anger has been fuelled by revelations that factory bosses forced 3,000 workers to continue working on Wednesday despite receiving prior information of cracks in the building, and also police orders to evacuate the building because of the cracks.

“The situation is very volatile. Hundreds of thousands of workers have joined the protests,” M Asaduzzaman, an officer in the police control room, told the AFP news agency. “We fired rubber bullets and tear gas to disperse them.”

He said some of the protesters were armed with bamboo sticks and their actions had forced factories at Gazipur, just outside the Bangladeshi capital, Dhaka, to close for the day.

Mustafizur Rahman, the deputy police chief of Gazipur, said workers had attacked factories, smashed vehicles, burnt tyres on the roads and tried to torch roadside shops on the sidelines of the rally.

“They are demanding the arrest and execution of the owners of the factories and the collapsed building at Savar,” he told AFP.

The overnight rescue of 45 people late on Thursday who were trapped inside the debris of the eight-storey building in the commercial suburb of Savar, on the outskirts of Dhaka, raised hopes of thousands of relatives.

An estimated 2,000 people had been rescued in two days, at least half of them injured, but up to 1,000 people remained unaccounted for, the Reuters news agency reports.