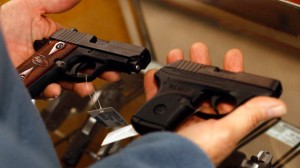 Council members in Nelson, Georgia, a city of about 1,300 residents that’s located 50 miles north of Atlanta, voted unanimously to approve the Family Protection Ordinance. The measure requires every head of household to own a gun and ammunition to “provide for the emergency management of the city” and to “provide for and protect the safety, security and general welfare of the city and its inhabitants.”

The ordinance however exempts convicted felons and those who suffer from certain physical or mental disabilities, as well as anyone who objects to gun ownership. The ordinance also doesn’t include any penalty for those who don’t comply.

But backers said they wanted to make a statement about gun rights at a time when President Barack Obama and some states are pushing for more restrictions in the wake of the Connecticut elementary school massacre in December that left 20 children and six educators dead.

Councilman Duane Cronic, who sponsored the measure, said he knows the ordinance won’t be enforced but he still believes it will make the town safer.

“I likened it to a security sign that people put up in their front yards. Some people have security systems, some people don’t, but they put those signs up,” he said. “I really felt like this ordinance was a security sign for our city. Basically it was a deterrent ordinance to tell potential criminals they might want to go on down the road a little bit.”

The city council’s agenda says another purpose of the measure is “opposition of any future attempt by the federal government to confiscate personal firearms.”

Nelson resident Lamar Kellett was one of five people who spoke during a public comment period and one of two who opposed the ordinance. Among his many objections, he said it dilutes the city’s laws to pass measures that aren’t intended to be enforced.

“Does this mean now 55 miles an hour speed limit means 65, 80, whatever you choose? There’s not a whole lot of difference. A law’s a law,” he said.

Kellett also said the ordinance will have no effect, that it won’t encourage people like him who don’t want a gun to go out and buy one.

The town has gotten an enormous amount of media attention since the council began discussing the ordinance last month. Councilman Jackie Jarrett said the response has been overwhelmingly positive. Most of the concerns have been raised by people worried about the mentally ill or convicted felons being required to own a gun, but he’s quick to point to the proposed exemptions, he said.

Mostly, he’s amazed that anyone outside of Nelson cares about the ordinance.

“It really has surprised me that we’ve gotten so much attention, especially since this isn’t affecting the world,” he said. “It’s just a small town thing.”

And, as it turns out, it may not affect Nelson all that much, even though the ordinance is set to go into effect in 10 days.

“Most everybody around here’s got guns anyway,” Jarrett said.