A man shows condoms from a bus window at the start of a road campaign in Yopougon, a working district of the capital city Abidjan on September 28, 2009, as part of an AIDS prevention programme for 5 millions people on an Abidjan-Lagos axis including five West African countries: Ivory Coast, Ghana, Togo, Benin and Nigeria 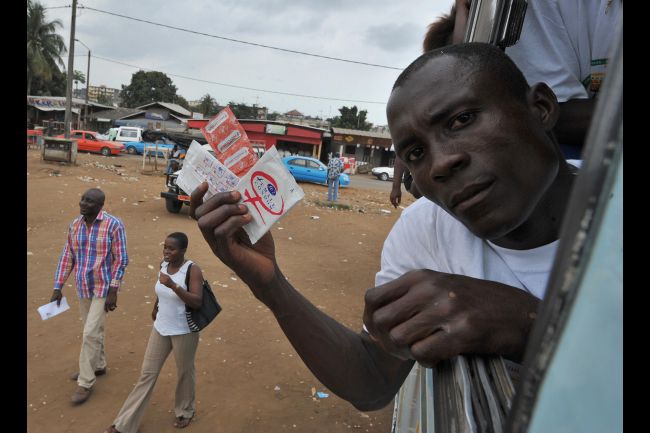 An alert has been issued in Ghana after it was discovered that about 200 million condoms imported into the country from China were faulty.

“There are holes in them and… the condoms burst easily,” a Food and Drugs Authority (FDA) spokesman told the BBC.

So far at least 1 million “Be Safe” condoms have been impounded by the FDA, who has appealed for health centers and agencies cross the country to stop their distribution.

Thomas Amedzro, head of drug enforcement at the FDA, said under the regulations, all imported condoms were required to undergo checks before distribution but in this case it had not occurred, The Guardian reported.

He said subsequent tests had found they were poor quality, can burst during sexual activity and also have holes in them

“You may not be able to see the holes with your naked eye but when you look at it under the microscope you can see holes,” he said.

The defective condoms, which were made by an unidentified Chinese company and imported from Kenya, are described as being in a silver and white package with a red AIDS ribbon and the words “BE SAFE” written on it, UPI reported.

Health officials fear it could cause a major public health issue and rise in HIV infection.