Friday is usually a special day many Muslim families look forward to, but to the members of the Bello family of Bayeku area of Ikorodu, Lagos State, Friday, April 6, 2013 will remain fresh in their memories for some time to come. 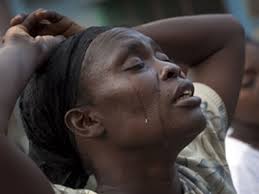 That was the day four members of the family and a neighbour died prematurely in an auto crash. A five months old baby of the family escaped the incident unhurt.

Prior to that day, the family had planned triple celebrations: their daughter’s graduation ceremony, car dedication of their son and the head of the family’s trip abroad alongside the matriachax. All the plans came to nought as a result of the tragedy.

The head of the family, popularlly called Alhaji Bello, was a prominent figure in Bayeku following his sponsorship of many Muslim programmes including the recent turbanning of the first Imam of the community which took place the Sunday preceding his sudden death.

As part of the arrangements for the trip abroad, Alhaji Bello had placed a change of name notice in Vanguard which was published on the day of crash. The family had not even bought a copy of the paper before the accident occurred around 12noon at Agbowa-Ikosi area of Lagos State.

Five persons including the five month old baby were in one of the cars the family members were travelling in while two others were in another as they headed for the graduation ceremony of their daughter at a tertiary educational institution in Ogun State.

All the five persons in one car with the exception of the baby: Alhaji Bello, his daughter- in- law and her parents, together with a neighbour, died while the matriach and her son in the other car survived.

An eye witness, Madam Kehinde Olufade, said the family had had a smooth journey until they approached a crater at Ikosi where motorists had to slow down. But due to the dilapidated nature of Agbowa road, a trailer left its own side of the road and faced the car Alhaji Bello was driving, forcing him to manouver before a tipper rammed into him from behind. The car landed in a ditch.

‘’As soon as the car landed in the ditch, the tipper also lost control and fell on top of the car killing the four members of the family and their neighbour on the spot.The Bellos daughter-in-law, who was carrying her five months old baby at the time of incident, died while the baby miraculously survived”,the eye witness narrated

When the news of their demise filtered into their community, it unsettled residents. The community development association (CDA) wanted the victims buried before sunset in accordance with Muslim tradition, but some indigenes countered them, saying some rituals must be performed before the arrival of the corpses in the community as the death of the family members portended a bad omen.