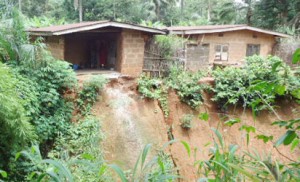 Gully erosion is ravaging Umike village in Awka South Local Government Area of Anambra State, with several houses in the area already swallowed by the erosion. The fear of the people is that if nothing is urgently done, the entire community might soon be washed away.

Indigenes of the community have therefore sent a Save Our Soul, SOS, appeal to both the state and Federal governments, as well as international donor agencies to come to their aid to curb the ravaging effects of the erosion.

In the meantime, former President of Awka Development Union Nigeria, AUDN, Engr. Pat Nzekwe has embarked on palliative measures to ensure that the menace did not spread further.

The gully erosion has washed away large quantities of arable farm land, and has consumed many houses and property worth millions of naira. The erosion measures about 60 metres deep and 60 metres wide.

The erosion which constitutes a threat to the lives of the inhabitants of the community is believed to have developed as a result of massive flood channels coming directly from other parts of the state capital and worsened by the construction of the Awka inner roads.

Gully erosion didn’t just start in Obuofu Umuike, residents have suffered its effects in the last 10 years, with many property worth hundreds of millions of naira lost over the years.

The community leaders said they had previously appealed to the various tiers of government to help find a lasting solution to the problem, but so far, nothing in the form of assistance has come their way.

Secretary General of ADUN, Mr. Charles Ekwunife, in a letter addressed to Governor Peter Obi, said that only a quick intervention by government would save the community from an imminent disaster. The letter read in parts: “We humbly write on behalf of the Central Executive Council of Awka Development Union Nigeria, ADUN, the traditional ruler of Awka, HRM Obi Gibson N. Nwosu, Eze Uzu II and the entire Awka community, especially the people of Umuike Village Awka to bring to your attention, the devastating hazards the residents of Obuofu Umuike Village Awka have been exposed to by flood and gully erosion.

“It might interest your Excellency to know that a philanthropist and an illustrious son of Awka Engr. Pat Nzekwe Ibe single-handedly commenced work on the site to check the advancement of the gully to other parts of the area and had made considerable progress until the heavy downpour of Friday 15th an Saturday 16th March, 2013 which destroyed and collapsed the entire construction done in the site, including washing away of over 500 trips of latrine sand heaped in the site.

“With the recent collapse of the already constructed culverts, flood retaining chambers and drainage system, the situation in the area has worsened and has therefore gone beyond the people’s control and that of Engr. Pet Nzekwe Ibe who committed several millions of naira in his control and reclamation bid in the site.