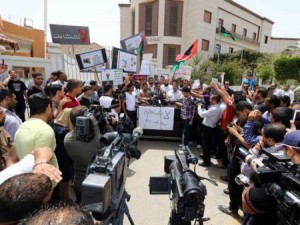 Gunmen have surrounded Libya’s foreign ministry in the Tripoli to push demands that officials who had worked for deposed leader Muammar Gaddafi’s government be banned from senior positions in the new administration.

At least 20 pick-up trucks loaded with anti-aircraft guns blocked the roads on Sunday, while men armed with AK-47s and sniper rifles directed the traffic away from the building, according to witnesses.

Esaam al-Naas, a Libyan military official, said there were at least 200 armed men surrounding the ministry building, adding that negotiations with the protesters were under way and that no one had entered the building.

Tension between the government and armed groups have been rising in recent weeks since a campaign was launched to dislodge the groups from their strongholds in the capital.

Since Gaddafi was toppled by Western-backed rebels in 2011, oil exporter Libya has been awash with weapons and roving armed bands who are increasingly targeting state institutions. Libyans believe the officials close to Gaddafi who are still in government are responsible.

Sunday’s protest was therefore to demand that a law be passed banning officials who had worked for Gaddafi from occupying senior positions in the government. The legislation is under discussion but has yet to be approved.

“The Ministry of Foreign Affairs will remain closed until the political isolation law (against ex-Gaddafi officials) is implemented,” the commander of the group told Reuters news agency.

He added that the foreign ministry had been targeted because some officials employed there had worked for Gaddafi.

The proposed law could affect several senior figures in the government, and has caused waves in the country’s political class.