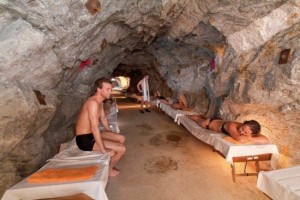 The largest pain management center in the world, and a popular health tourism destination, the Healing Caves of Gastein welcome over 75,000 people every year. They all flock to this miraculous place to undergo a controversial form of therapy with radioactive radon gas used to cure a variety of medical conditions, from arthritis to psoriasis.

When the people of Gastein started exploring the nearby Radhausberg Mountain in search of gold, they had no idea they would discover something infinitely more valuable –  naturally occurring low levels of radon gas. In time, they realized that the radioactive gas combined with the mountain caves’ high humidity and temperatures of up to 41.5° Celsius helped strengthen their immune system and cured some very serious illnesses.

Word about the Gastein Healing Caves spread like wild fire throughout all of Austria, Germany and other Central European countries, and today Gastein is known not only as a world-class skiing destination, but also as a miraculous place of healing with a mind-blowing success rate of 90%. Most of the people who come here for radon treatment say a few sessions in the caves keep them pain-free for a whole year. Apparently, the radioactive gas is absorbed through the skin and lungs, activating the body at a cellular level and stimulating the self-healing process.

At the entrance level, the  Gastein Healing Caves healing center looks like any other super-modern medical clinic, with doctors and staff dressed in immaculate white robes, but the real magic happens deep inside Radhausberg Mountain. After they check in, patients are directed to the changing rooms and instructed to leave their mobile phones and other high-tech gadgets in personal lockers, as they can be damaged by the caves’ high humidity. Once they’ve slipped into their bathing suits, patients go though a short introductory speech about what awaits them in the healing caverns, after which they are invited to board a miniature yellow train that takes them two kilometers inside the mountain. The first thing you’ll notice is even the train’s conductor is wearing a bathing suit, but as you approach your final destination and temperatures reach close to 40° Celsius, his attire starts to make sense.

Once the train reaches the healing galleries, patients are invited to lie down on the wooden beds lining the walls of the caves and relax. Talking is discouraged and the only disturbing sounds you hear are the physicians’ footsteps as they patrol through the rock tunnels, and the occasional snoring. Due to the high humidity and sauna-like temperature, the hot atmosphere in this place can be a little hard to handle for some, and if it becomes unbearable, all you have to do is push a button and a crew will come and whisk you away to a special cooling room where fresh air is blasted in through a pipe. For emergency cases, there is even a spare train that can quickly take patients back outside.

Although radon gas therapy is accepted in Austria and Germany, and even available on health insurance, physicians in other countries are skeptical about treating patients with radioactive gas, even in small doses. High levels of radon are believed to be toxic and can increase the risk of lung cancer, but doctors at the Gastein Healing Caves are firm believers in the principle of hormesis. They believe small doses of particular toxic substances can be beneficial to humans, even if high doses can be dangerous or even lethal. And scientific studies conducted on patients visiting the healing caves seem to agree with them.

In 2001, Maastricht University studied patients with ankylosing spondylitis, a condition characterized by severe joint pain and stiffness. One group of patients underwent radon gas therapy followed by physiotherapy, a second group had sauna treatment and physiotherapy, and a third one had only physiotherapy. The group treated with radon showed the most significant signs f improvement. Also, in 2000, Leipzig University studied a group of patients suffering from rheumatoid arthritis. After six months of treatment at Gastein, their condition had improved greatly.