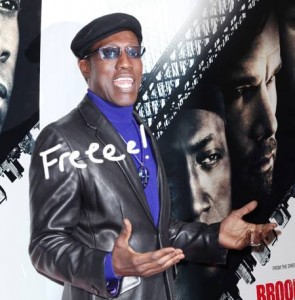 Snipes was sentenced to three years in prison in December, 2010 for willful failure to file federal income tax returns was released on April 2.

The 50-year old Snipes has now reportedly been transferred to the New York Community Corrections Office, which will oversee his house arrest until July 19, 2013 when he will regain his full freedom.

Snipes who was in Nigeria for the second time in September 2005 for the commissioning of the ultra-modern entertainment and recreational centre, The Dome in Abuja was awarded an honorary citizenship and a chieftaincy title as Ikemba of Mbaukwu in Anambra State.

The actor is best known for his roles in films such as the ‘Blade’ trilogy and ‘Passenger 57’ and he is married to South Korean, Nakyung ‘Nikki’ Park with whom he has four children and one from a former wife, Jelani Asher.